Hover your cursor over the photos, below, then click on the arrows to see more photos from our trip:

One of the outlier parks in the National Park System, Virgin Islands National Park was established in 1956 with an initial gift, not surprisingly, from a Rockefeller.  In keeping with the family’s prodigious generosity in supporting our nation’s parks, conservationist Laurance S. Rockefeller gave 5,000+ acres of his personal estate (now the Caneel Bay Resort) which started the park.  Nearly 70 years later, Virgin Islands National Park now includes about 60 percent of the island of St. John, nearly 6,000 undersea acres along the north side of the island, and a couple of small islands nearby.

We spent a very relaxing, very enjoyable week on the island of St. John from January 2-9 with the specific goal of visiting V.I.N.P., and like I think happens to many people who visit here, we fell in love with the place.  Nearly everyone we met has been coming here for years, if not decades, to enjoy the island’s quirky yet magical charm.  St. John is not large – we rented a jeep for a couple of days and drove from end to end in under an hour.  Only about 4,000 people live here, and the island is a rich, spicy blend of true St. Johnians (less than 10% of the population), some West Indian culture mixed with Spanish influences, some older folks enjoying second and third careers in a more weather-friendly and stress-free environment, some young people in the service industry opting out of the cold winters found back up North, and lots of laid-back tourists enjoying Island Time as we did.  A famous country singer has a place here, too – that would be the hot and hunky Kenny Chesney – unfortunately he didn’t appear to be on the island when we were.

St. John is scalloped with a couple dozen bays and inlets providing safe harbors [only on cans; no anchors here, for they damage the reefs] for the many boats that moor in these waters.  White sandy beaches invite sunbathing and swimming, with the always-popular Trunk Bay consistently named a Top 10 Beach by Conde Nast and other notable travel magazines.  The crystal-clear turquoise waters found here offer fabulous snorkeling and diving along the coral reefs.  On the days we had our jeep, we frequented several of the bays (Maho, Trunk, Salomon, Caneel, Salt Pond, and Waterlemon) where we swam and snorkeled among the abundant marine life – colorful reef fish, menacing stingrays and graceful sea turtles lumbering in the sea-grass beds.

There are just two towns here – Cruz Bay on the west end and Coral Bay on the east, but as the ferry landing is at Cruz Bay, most of the restaurants, the two grocery stores, and a majority of the shops are here.  We found a gem of a condo, the Lavender Hill Suites, which was walking distance to nearly everything around Cruz Bay, most importantly, the bars and restaurants where happy hours began around 4 p.m. which we found very much to our liking after our ‘rough’ days of either hiking in the park, lounging by the pool, or snorkeling in the beautiful bays.

With over half of St. John being the national park, much of the island remains undeveloped, which is just what Laurance wanted – to protect and preserve the natural habitat that is on these beautiful Caribbean islands.  Of increasing concern is the escalating pace of development outside the borders of the park.  St. Thomas, right across the sound, is teeming with hotels, condos and houses, and with cruise ships making stops in Charlotte Amalie, that whole island has become commercialized.  St. John, then, is even more special as that over-development has not [yet?] happened here.

In the park, we enjoyed several hikes — from shorter ones with small elevation changes accessible right from Cruz Bay, to the most notorious on the island – the Reef Bay Hike.  Beginning from Centerline Road, we hiked down nearly three miles to Reef Bay, hiking in the higher elevations through wet tropical forests, then into more dry areas and cactus scrublands as we decended past a wide variety of plant life.  After a couple of miles past four old sugar estates and plantations, and including a detour to the Petroglyph Trail which feature many pre-Columbian Taino carvings dating back some 1,200 years, we arrived at Reef Bay.  Then we had to turn around and hike up a couple of miles!  Oh well, it was good exercise.  We hiked several other areas on the island, as well, and came across several other sugar plantation remains that date back some 300+ years.

When talking about sugar plantations, the dark side of St. John and these surrounding islands cannot be ignored.  In the early 18th century, when St. John was a Danish territory, there were more than 100 sugarcane and cotton plantations on the island which prospered from the slave labor of Africans.  A revolt in 1733 was quelled, and slavery continued until 1848.  Work in these cane fields and in the ‘boiling rooms’ on these plantations was hot and difficult, but these slaves were driven by their owners to meet the insatiable desire for sugar and rum that came primarily from these islands.

Fast forward 75 years as these old sugar estates were deteriorating, the United States, feeling the need to have a Naval base in this part of the world, bought the Virgin Islands – St. John, St. Thomas, and St. Croix – from Denmark in 1917 for $25 million, and they remain a U.S. territory today.  Interesting to note, folks who reside on the island cannot vote in the U.S. Presidential elections, but they do have an elected delegate to Congress.  Who knew?!?

All around the U.S. Virgin Islands are the British Virgin Islands.  We took one day to enjoy the waters and islands surrounding St. John, and did so aboard Stormy Petrel, a private charter boat that offers a full day – some 65 miles! – of cruising all around the islands.

Following the orange path on the map, we made several stops, including the famed Baths on Virgin Gorda where we got to explore the caves and grottos made from massive rocks before we snorkeled all around the area.  Then we stopped on Cooper Island where, as I mentioned in a previous post, we had lunch at the table right next to Derek Jeter and his friends!  Finally, we snorkeled at The Indians which, as Fred describes it, was like snorkeling in a big fish aquarium – it was spectacular!!!  Our captain, Jug, and mate, Meagan, made the day a terrific one (made even more terrific with Meghan’s world-famous rum punch!), and we will absolutely take the same charter trip again the next time we visit.

I could go on and on about V.I.N.P. and the great time we had at this park, but I’ve already gone on long enough.  I’ll end with the food.  In a word, it was delicious!  While pricey in the touristy places such as the Westin and Caneel Bay Resort, we found some more low-key spots including The Beach Bar, High Tide, Cafe Livin’, and Uncle Joe’s BBQ much to our liking.  We had a particularly great meal at a local favorite, De’ Coal Pot with our new friends, Kevin & Suzy, who, incidentally, are from a northern suburb in Chicago.  We met them at our pool, became fast friends, then dined the last two evenings with them.  Our Caribbean cuisine featured local roties (like a pasty), oxtail stew, and fresh whole snapper; we skipped the curried goat.

So for the past eight months, people have asked us, ‘What’s your favorite park?’ to which I have replied, ‘That’s too difficult to answer; they’re each unique and special’… something along those lines. But I now do have a favorite park, and it’s Virgin Islands National Park. All in all we had a fabulous time here, and can’t wait to come back for a return visit! 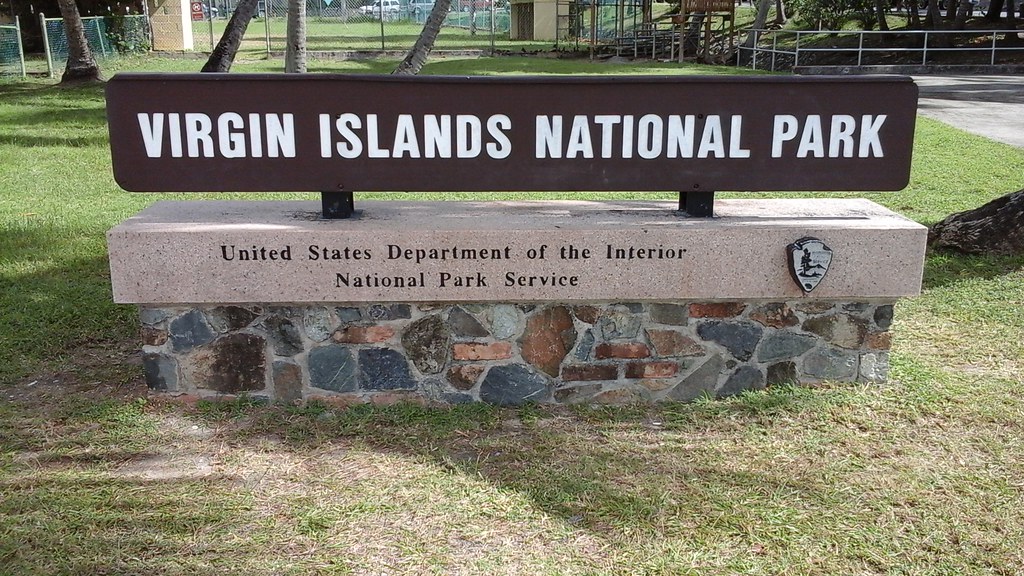 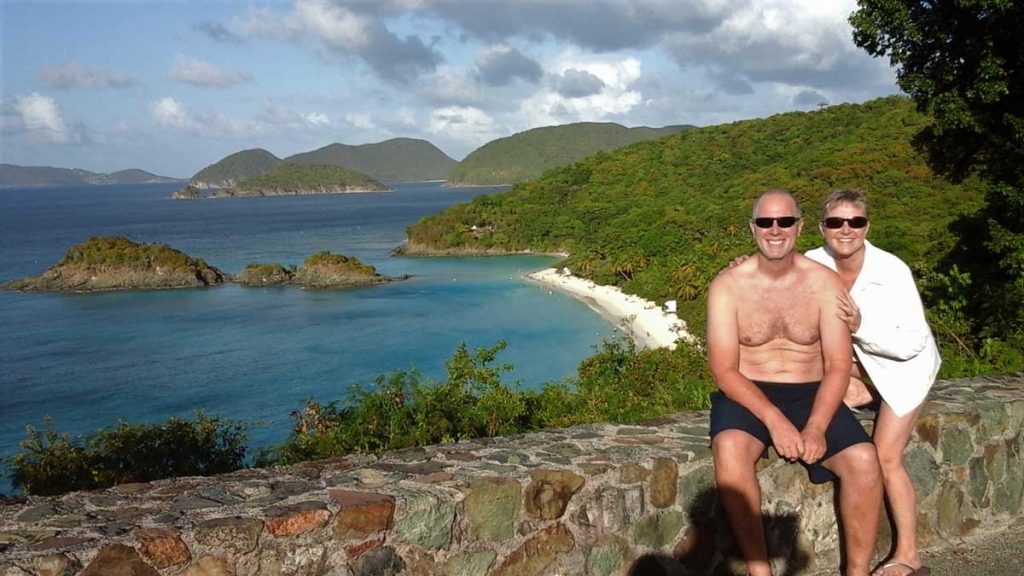