August 19 — We spent a nice afternoon here at Valley Forge which is about 20 miles outside of Philadelphia.  I’m sure I sound like a broken record because I keep saying this, but it’s true – we were once again impressed with the features, layout, and exhibits in the park.  We took in the introductory film in the Visitor Center, walked around the exhibits and viewed artifacts from this time period, and then enjoyed the 10-mile self-guided driving tour around the Encampment Area – it was all very well done!

So we all know that Valley Forge was the site General George Washington chose for his Continental Army’s winter encampment.  Valley Forge was chosen for its proximity to Philadelphia – it was close enough for Washington to monitor the British Army’s activities in Philly [they had recently taken control of this, the patriot capital, forcing Congress to flee to York, Pennsylvania] but far enough away to prevent a surprise attack on Washington’s troops as he tried to keep alive the hopes of Independence.

I knew this all happened during Revolutionary times, but I hadn’t remembered when exactly – the Continental Army was here from December 19, 1777 until June 19, 1778; a full six months.

Until visiting Valley Forge, I hadn’t stopped to realize how significant this time actually was for the patriot soldiers, the leaders, and ultimately what would become the United States.  Yes, I remember there were hardships here and that the winter was cold, but seeing replicas of the huts these determined men built once they got here, and then imagining the long, cold winter they had to endure here… or understanding just how inadequate the food, clothing and equipment there was, as evidenced by the letters in the exhibit that Washington and others had sent to Congress to try to secure appropriate provisions for his army to fight the British… wow! – such perseverance!  But that we all could understand and appreciate these extreme sacrifices….

As tenuous as the conditions here were, Washington inspired his men through his own resilience and sense of duty.  He persuaded Congress to reform the supply system and end the crippling shortages.  He attracted experienced officers to his cause, including former Prussian officer Baron von Steuben, who was given the job to train the troops.  Von Steuben taught the soldiers new military skills and to fight as a more unified army.  In fact, Von Steuben’s reforms in supply systems, fighting tactics, military hygiene, and army organization became the foundation of the modern United States Army!

Before my visit here, I hadn’t stopped to consider that Washington’s army was made up of men that 13 quite-disjointed Colonies sent [they wouldn’t become true States for another 10 years], and that these men, not having any training, all showed up to fight in various states of preparedness – or lack thereof – of clothing, weapons, and the like.  It’s truly amazing what they accomplished in the face of these tremendous odds that were stacked against them!

Washington’s words are inscribed on the National Memorial Arch, “… naked and starving as they are, we cannot enough admire the incomparable patience and fidelity of the soldiery.”  So true are these words.

An inscription in the Visitor Center very nicely summarizes this place… ‘Over the course of the American Revolution there were many highs and lows, battles won and lost, but it is Valley Forge that has become a symbol of resilience for the American people.  It was here that the Continental Army survived hardships; where conflicts and choices were made; where leadership was inspired; and where the army was transformed in such a manner as to ultimately achieve our country’s independence.’

A bit of foretelling here… After Washington’s Continental Army was strengthened during their winter here in Valley Forge, they went on to fight the British troops more effectively.  Still, battles would go on for another three years before British General Cornwallis surrendered at Yorktown to end the last major campaign of the Revolutionary War, and then another two years [1783] before the final peace treaty was signed in Paris and British troops would leave America for good. 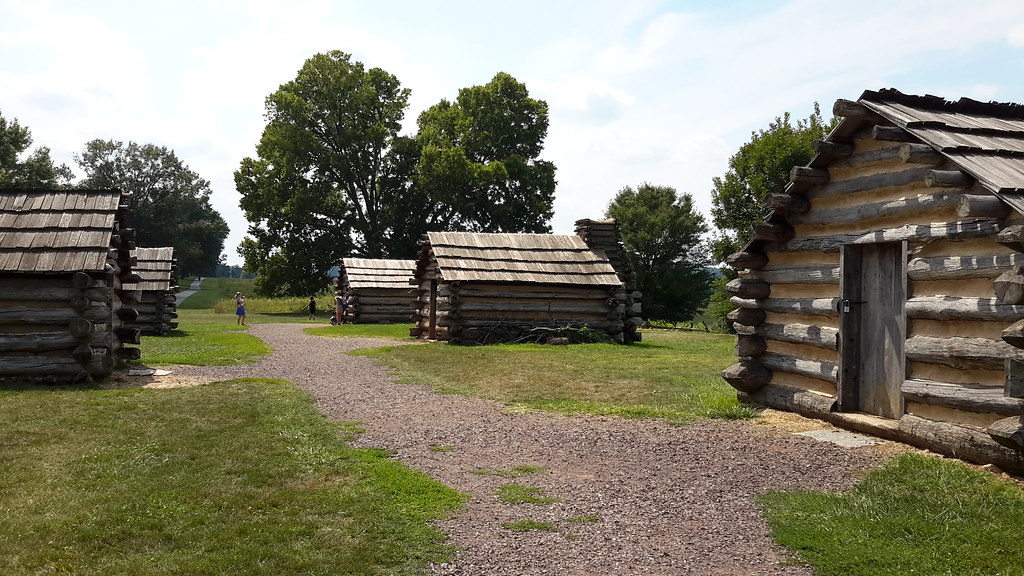