We have spent the better part of these last six months in the American Southwest, and we seem to keep criss-crossing the Four Corners region that is Utah, Colorado, Arizona, and New Mexico — there is truly so much to see here!  In our many passes through this area, we have visited more than twenty different national park units that preserve and protect ancient Native American dwellings, artifacts and history.

In each and every one of our visits to these sacred places, a theme, obvious as it is, kept running through my head — they were here first.  A long time ago.  Between 12,000-13,500 years ago.  The First Peoples of our country.  Not the Spaniards who wanted this territory to expand their own in the 16th and 17th centuries.  Not our European ancestors who took over this land in the 18th and 19th centuries.  No, it was the American Indians who were here long before us.  Navajo and Zuni and Shoshone and Paiute… Cheyenne, Arapaho and Ute… Apache and Comanche and scores more.  They all came before us and lived their lives here long before we ever did.

I won’t use our travel blog as a political platform, but with all the talk of refugees and building walls and the clear rise of xenophobia, not just in the United States but throughout much of Europe, as well… and now just this week as the reality of the true meaning behind the “Leave” vote associated with Brexit sinking in, I can’t help but think back to the Native Americans.  The cartoon on the right was posted on Facebook and it seems to punctuate my point.

Enough said in my non-political post.  Here are the highlights and photos from our visits to the last three national monuments we have visited, all designated to protect ancient Native American dwellings that belonged to those who came before us.  [Note the Native Americans don’t consider these places ruins, but rather sacred places.]

Tuzigoot National Monument can be visited by taking a nice little ride south of Sedona, Arizona; we toured this place a couple of weeks ago when we returned to this area.  Managed in conjunction with Montezuma Castle which we visited back in February (see my Montezuma Castle National Monument post) this place was one of the homes of the Sinagua peoples; ancient farmers in the Verde Valley.  Evidence of their agricultural lifestyle has been found, chronicled, and preserved in this place that means crooked water in Apache.  Tuzigoot pueblo was originally two stories high, crowning the summit of a long ridge rising above the Verde Valley.  In addition to walking around this ancient dwelling, the Visitor Center is home to a wonderful little historic museum featuring incredible artifacts and explanations of the life of the Southern Sinagua peoples.  Most impressive to me was the intricately painted pottery.

Yucca House National Monument was a bit underwhelming, but then again, there is nothing at this monument other than two mounds of rubble covered with vegetation.  This site that is eight miles south of Cortez, Colorado, is unusual in that the pueblo being protected has never been excavated, so it remains just the way it was abandoned eight centuries ago.  One of our guidebooks had a photo of what looked like a sign on a locked gate, but we didn’t find any such sign when we attempted to visit.  This photo is it — the unearthed remains of the pueblo called Yucca House.  As no services whatsoever can be found at this location, we had to get our passport stamp at the Colorado Visitor Center in Cortez.

Hovenweep National Monument was just the opposite of Yucca House; this place was spectacular as it features dramatic evidence of once-thriving Pueblo communities grouped at canyon heads in this area along the Colorado-Utah border that is otherwise just full of pinion, juniper, scrub sage and yucca.  There are six sections to this monument that is in the heart of Canyon of the Ancients National Monument, a property managed by the Bureau of Land Management (BLM).  We visited two — the Square Tower Group, which is the main area with a wonderful Visitor Center, and the Holly Group which took a lot more effort to get to.  As one of the photos below shows, it’s a good thing we drive a Subaru!

Square Tower Group — After watching the overview movie in the Visitor Center, we hiked the 2-mile loop trail that took us up one side of Little Ruin Canyon, down through and across it, and up the other side.  Along the way we passed a dozen archaeological sites with ancient structures atop the mesas — these round, square, and D-shaped towers were the homes and ceremonial buildings to the ancestors of today’s Pueblo Indian tribes.  Although these dwellings have not supported life for some 700 years, the remains show that the Pueblo people were skilled builders.  They shaped very uniform bricks and held them together with mud mortar, often studded with smaller, decorative stones.  Incredible are these remains as they demonstrate the skilled precision with which these three- and four-story towers were built centuries ago. 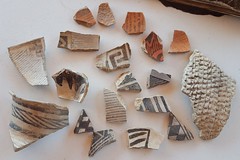 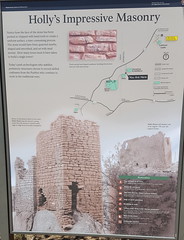