When we started planning our return visit to Alaska, we knew that in addition to visiting our final two national parks up there we also had to trek to Barrow, Alaska.  Why?  Because our visit to the previous “northernmost city” in Minnesota [see Northwest Angle post] had an asterisks behind it — it was only the northernmost city in the contiguous United States.  If we wanted to make the claim that we visited the true northernmost place in the whole of the U.S. on this road trip (which we did/do!) then we had to trek all the way up to Barrow, Alaska; for Barrow is the true northernmost north point — the ‘Top of the World’ as they claim.

Barrow is 330 miles above the Arctic Circle; it’s right on the edge of the Arctic Ocean where the Chukchi and Beaufort seas meet. It’s the undisputed northernmost city in the U.S.; the ninth northernmost city in the entire world. Barrow is so far north that trees can’t grow up here. One of the photos I’ve shared below shows an interesting perspective of this native village as we approached it from the air, and you can see how flat all of this land on the North Slope is —

it’s permafrost underneath tundra that’s covered with snow for much of the year. Barrow is not on the road system; the only way to get up here is via plane, barge, or an ice road in the wintertime. Incidentally, said barge (also in the photo mosaic below) makes just one trip per year, bringing goods people order and need to have shipped up here in shipping containers — trucks, 4-wheelers, non-perishable food, etc. Then once the natives empty out their containers, they use them for additional storage for their households. Photos also show a lot of re-purposed shipping containers dotting the village.

As we checked in at the Anchorage airport for our flight up to Barrow, we were a bit befuddled when we first observed everyone with coolers and boxes of cold/frozen food that they were checking as their baggage.  My initial thought was why would they be coming down to Anchorage to fish and ship that all back up to their village which is right on the ocean?, for the Anchorage airport is full of people flying freshly-caught Alaskan fish back to the Lower 48.  But then we learned that it’s cheaper for Barrow residents to fly from Barrow to Anchorage when Alaska Airlines offers cheap fares, purchase food there (there are two Costco’s in Anchorage that are wildly popular), then bring their limit of 150 pounds of cargo (three 50# containers are allowed per person) with them on their flight back to Barrow.

And that now makes sense to us after a visit to the AC Co. store, which carries everything from basic groceries to Carhartts, from sofas to housewares.  Let me tell you, food up there is E-X-P-E-N-S-I-V-E!  Transportation costs are the primary drivers, and short-shelf-life items are particularly pricey.

A gallon of milk will run you about $16; a very small pineapple flashed a price of $10.39; a 5-pound bag of carrots will set you back $14.39; and 1.75 gallons of Tide detergent (slightly bigger than what Costco offers) costs a whopping $58.99!  We wondered how people could afford to live up here and pondered the paradoxical notion that these Iñupiat natives, of all folks, could arguably least afford such outlandish prices.

Our Top of the World hotel offered a 4-hour tour, lead by a lovely Iñupiat native.

Seven of us joined in, stopping to see the icons of Barrow including the Whale Bone Arch, the school, the Iñupiat Heritage Center, the big blue football field [made possible because of a very generous benefactor from Florida who saw that this eager team had no field and instead was having to play on the rocky, sandy Arctic road; ESPN profiled this story – check it out:  E-Ticket: Save The Whalers], and several other spots.

We had the opportunity to take a true Polar Bear Plunge in the Arctic Ocean, but passed — I was happy enough just feeling the cold water with my hand; Fred braved a short wade in the waters for a photo op then quickly got out of the frigid sea.

Fun fact: when the sun sets here in just a couple of months (around the 18th or 19th of November), it doesn’t rise again for 65 days.

Here are a few more facts about Barrow:

§  Barrow has around 4,200 residents, most of them native Iñupiat whose ancestors have lived here for over 1,500 years

§  Scientists say the Arctic is warming twice as fast as the rest of the planet, and Barrow has been called “ground zero” for climate-change science

Here are some photos from our visit to the very unique place that is Barrow, Alaska: 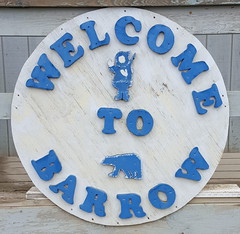 These photos are from the wonderful Iñupiat Heritage Center, one of the stops along our Barrow tour: 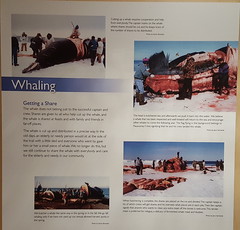 While our visit to Barrow was a short 24 hours, I think we packed in all that we could, short of joining one of the more than 40 whale crews to pursue a Bowhead whale or row out to the ice floats to see polar bears.  [For the record, the ice was still 10+ miles off the shoreline, and so, too, the polar bears.]  Happily, we can now claim unequivocally that we have been to the true northernmost north of the United States!