That’s the news from Lake Wobegon,
where all the women are strong,
all the men are good looking,
and all the children are above average.

The memories sometimes find their way out…I am five years old lying on a sofa in the front room of my grandparents’ farm house drifting off to sleep and faintly hear my grandmother mention her friend Verna and that they would be going to the church bizarre on Saturday…I am playing in the barn with my brothers at the homestead making believe that an old furnace that is stored in the barn is a submarine…I am singing Silent Night at the end of the Christmas Eve service at St. Paul’s Lutheran Church…I sit in the baseball stands at the Chenoa Park watching my father walk across the infield toward the Crosley that he will drive in the 4th of July parade for the last time later that day…my mother is frosting chocolate drop cookies in the kitchen of our farm house…I’m looking at a photo of my grandfather and my uncles standing in front of a team of horses pulling a wagon full of corn…I think of my grandfather right before he died drifting in and out of consciousness mumbling about his two Belgian workhorses, Brownie and Jack…As I listen to the show on the radio, the memories sometimes find their way out.

I think that it is mostly the stories and the voice. Oh, there is certainly a wonderful variety of music: folk, bluegrass, blues, classical and others. There is also a great deal of humor, none of which is off-color, just good, clean comedy. Sometimes there is poetry. In a throwback to times gone by, there are even sound effects generated by a single individual working frantically at a small table. But it is the stories and the voice that draw out the memories and take me back to moments now residing in the deep recesses of my mind.

On July 1, 2016 Garrison Keillor made his final appearance as host of the radio program, A Prairie Home Companion. Normally broadcast live on Saturday evening, this show was actually performed and recorded on Friday night and was then broadcast on Saturday evening at its usual time. After 42 years of writing and hosting the show that he created so many years ago he is turning the show over to the next generation and freeing up his weekends. For those who have not listened to the show, A Prairie Home Companion, and Keillor’s weekly monologue in particular, is about my hometown, Chenoa, Illinois. OK, not really, but it could be about Chenoa or just about any other small Midwest town.

The show is performed live and is like an old-time variety radio program with various types of music, comedy skits, poetry every now and then, and Keillor’s monologue about life in a fictitious town in Minnesota called Lake Wobegon. He talks about the quirky personalities who reside in the small town, about those who gather at the Chatterbox Café, the Sidetrack Tap, the local Lutheran Church, potlucks, school plays, farmers and farming, and just about everything that you might experience in a town like my hometown. While the various characters in his monologues tend to be Norwegian, they could just as easily be of German ancestry with names like Jacobs, Rhoda and Wahls. If you can imagine a radio program from the 1940’s, then you have a pretty good sense of what the show is like. Keillor’s inspiration for the show was a Grand Ole Opry performance in 1973 that he listened to through a window of the Ryman Auditorium in Nashville because he could not get a ticket to the show.

I have listened to the radio program on Saturday evenings on various NPR stations since the early 80’s, but had never seen it live, something that I always wanted to do. And so I would have one last chance and decided that the one show that I would see in person would be his last show, the one at the Hollywood Bowl in Los Angeles. Just a few minor hitches: we did not have tickets for what would be a much anticipated show; we did not have a place to stay in LA; and we were currently in Arizona and would have to somehow get to LA for the show, while making our way into Colorado where our next stops would be.

Laura, the Chief Logistics Officer on this trip, was not terribly happy with me for changing our itinerary, as she had made reservations at Rocky Mountain National Park over the very popular Fourth of July weekend months in advance, and now I was not just going to throw a monkey wrench into the works, but the whole darn toolbox. After some major cajoling, I got her to buy in on a plan that would take us to the Denver area where we could leave Charley and fly to LA for the show. I was also able to find a couple of tickets on a secondary market and secured a hotel room at a place that is a 10-minute walk from the Hollywood Bowl. We were set.

Attending the show that evening at the Hollywood Bowl with more than 17,000 other fans was indeed worth the 30+ year wait. Our seats were close to the stage so we could see everything that went into the live performance, and Keillor does indeed wear many hats. Besides creating the show and hosting it, he writes it each week, is a humorist, sings beautifully, is a political commentator, and writes original songs for most shows and then sings them. Wearing a somewhat rumpled linen suit, his trademark red shoes and red tie, it was fascinating to watch how intently he focused on the task at hand, glasses sliding down to the very end of his nose and haphazardly dropping pages of the script to the stage floor after he read them.

He is also a combination of director and conductor, roaming around the stage as others perform and occasionally stepping in to provide harmony; gesturing to two fiddle players that he wants them to play an impromptu duet; talking to the technician on the sound board during a fellow performer’s solo. The man without a baton keeps the swirl of activity moving so seamlessly, that listening to the show and not seeing it one might think that everyone is fixed in their position on stage and simply waits for their turn to perform.

With a few exceptions, Keillor’s final show was pretty much void of sentimentality and a long goodbye. In listening to or watching the program, if you were not aware of the significance of the evening, you would think that this were just another Saturday evening production. There was no string of stars who would appear in the final show, only his usual cast. There were no elaborate gifts like a motorcycle, or a car, or some exotic trip that we have come to expect when sports stars or entertainment personalities retire. There were only a couple of nods to the specialness of the event: Keillor wrote a wonderful farewell note that was distributed to those in attendance; and the other acknowledgement was a call from President Obama during the show. Even then Keillor kept turning the conversation back to the President and appeared uncomfortable hearing the kind things that the President was saying about him.

When his longtime cast members attempted to convey their sentiments, he politely brushed the compliments aside and moved on. There were no hugs or handshakes, just the show. Finally, after the show had concluded and they were no longer doing the radio program, he came back from the wings, walked to the front of the stage for a curtain call of sorts, and began to sing a collection of six songs acapella with the audience singing along that seemed to be chosen in the moment, that ranged from “Happy Trails” to “The Doxology” to “Can’t Help Falling In Love.” He appropriately finished with the Amen Chorus, took a shallow bow, said thank you, and then walked off into the darkness at the edge of the stage.

I will miss him on Saturday nights. While the show will continue with another host, it will be much more musically oriented and we will no longer hear the voice or the stories. The voice that is so perfect for radio: a wonderful baritone, smoooooth, evenly paced delivery, but most importantly, calming. When I listen to the show the voice resonates deep within me and I can actually feel myself relax. And his stories about life in a small Midwest farming community so perfectly lend themselves to the easy way in which they are told. These stories about local farmers, or the Lutheran Church, or the 4th of July parade, or his aunts and uncles, draw out of me wonderful memories of family, friends and growing up in Chenoa. Regardless of where I might be, when I listened to the show I am back there again, on the family farm outside of a small town in central Illinois, playing with my brothers in the barn, sitting outside on a warm summer’s eve talking with Mom and Dad, or having dinner with my grandparents.

With all of the craziness whirling around us in today’s world, it was nice every now and then to step out of life and transport myself to Lake Wobegon. A place on the edge of the prairie, “where all the women are strong, all the men are good looking, and the children are above average.” Yes, I will miss him.

Photos from our evening with Garrison Keillor and A Prairie Home Companion at the Hollywood Bowl are below. 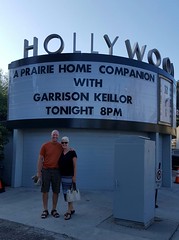 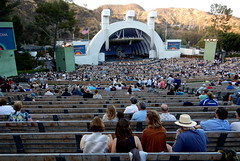 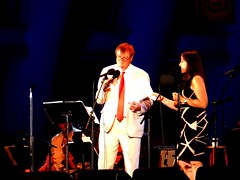 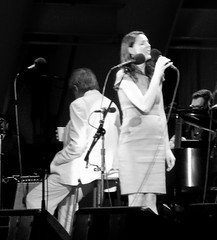