As I mentioned in my previous post, it’s really about the bears here in Katmai National Park and Preserve these days. What was originally set aside as a national monument to protect the centerpiece of the park, the Valley of Ten Thousand Smokes, and the volcanoes, glaciers and wilderness area surrounding this roadless backcountry, has now been expanded over the years, and the shift has changed in the park to protecting the thousands of brown bears in this area.

Brooks Camp is world famous for its bear viewing and that is why we chose this area of the park to visit — that, and most of the rest of the park is backcountry… oh, and to get anywhere in Katmai you must fly in, so we chose the most popular place to visit.

We arrived on our floatplane and were immediately ushered to “bear etiquette” school; a 20-minute program administered by the National Park Service to ensure all visitors know how to behave around these wild creatures. After that we were given our cabin assignments, and I do mean cabin — our accommodations had two sets of bunk beds; I felt like I was at summer camp! — we were free to go explore around the lodge and camp.

To view the bears at the quintessential place to see them, Brooks Falls, we had to walk a mile out a trail and along some protective boardwalk. Two viewing platforms provided some nice vantage points as well as safety from these wild, hungry creatures.

In the summer months, brown bears are out and about looking for food as they must eat a full year’s worth in 6-8 months to ensure they can survive the winter. During salmon spawning season in July and September, Katmai’s bears congregate around the rich, protein-concentrated food sources that are here at Brooks Falls. It’s a cycle — the salmon draw the bears and the bears draw the people.

The bears we saw here at Brooks Camp in Katmai NP were much larger than those we had previously seen at Lake Clark NP; the dominant males that we saw at the falls weighed in somewhere near a thousand pounds. Fortunate were we to see a few bears at the falls area, a few more around camp, and a mama with four little dark brown spring cubs when we went out on a boat excursion to another bear viewing area.

Here’s a big bear coming out to do some fishing: This guy really wants some food: Finally, he gets his prized salmon:

There is a lot of effort and careful logistical planning that is required to make the journey out to Katmai and all but a few persistent visitors stay away from this area, but those that do visit are rewarded with spectacular nature that truly stirs the soul. 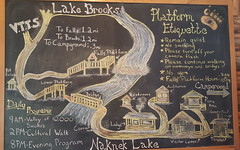 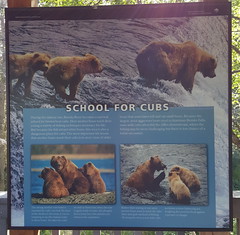