When we began this odyssey a little over a year ago, there were many things that we wanted to see and experience. So far we have traveled over 36,000 miles between Charley and Toad, watched the sunrise over the Atlantic and saw that same sun dip into the Pacific, visited beautiful national parks where we gazed upon soaring peaks and rushing water, and viewed incredible wildlife in the most natural of settings. Regarding wildlife, from the outset of the trip there were primarily two animals that we wanted to see: a bear and a moose. Oh, it would be great to see a mountain lion, but we are not holding out much hope of that, as they are very elusive. However, we knew that bear and moose sightings were entirely possible.

The bear sighting came first, if you want to call it that. Back in November 2014 we saw an infant bear on the side of a mountain in Great Smokey Mountain NP. It was far from a clear sighting as the bear had its nose buried deep in fallen leaves. But seeing bears would not be limited to that one occasion, as we saw a number of them when we visited Sequoia NP. I shared some of those bear photos in my May 13, 2015 post. That just left a moose. 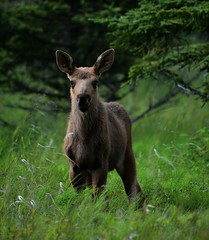 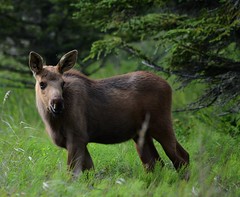 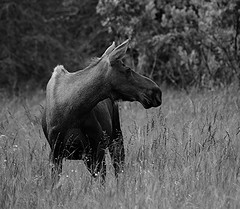 It is not like we haven’t been in moose territory. Our first stop on this trip was Isle Royal NP, which has both moose and wolves roaming through the dense vegetation that covers the islands in the archipelago. Nothing. Next stop, Voyageurs NP in northern Minnesota. Again, plenty of moose tracks (not the ice cream) and other indicators (Hey, watch where you step!) that they had been in our vicinity, but no actual moose. Disappointed, but not discouraged, we moved to the northeast last fall to areas where moose run rampant: Vermont, New Hampshire and Maine. For heaven’s sake, I think that the moose is Maine’s state symbol. Again, a big goose egg on the ‘ol moose scoreboard. All the while, Laura kept assuring me that if all else failed, there was always Alaska, where the moose graze in people’s yards and stroll down Main Street.

So when the plane from Seattle (we left Charley and Toad behind for the Alaskan leg of the trip) began its decent into Juneau, I half expected that we would pull up because of a moose on the runway. But no moose sightings in Juneau; nor when we visited Glacier Bay NP; nor when we came back up to Anchorage; nor when we drove to Homer even though we passed through prime moose terrain; nor in Homer, where the owner of the B&B where we stayed said that one occasionally visited their yard. Nothing…but that would not be the case for much longer.

On the road out of Homer heading up to Seward, we decided to take a detour and see a beautiful, old Russian Orthodox church just off of the highway. It was as we bumped along a dirt road leading to the church that our travel companion, Chris, spotted a female moose walking through a stand of pines. I immediately slammed on the brakes, grabbed my camera fitted with a telephoto lense, and slowly made my way across a spongy field to get the best angle for a shot, all the while looking for any other moose that might think it a good idea to charge me, and scoping out an escape route behind a large tree if that were to happen. Just as I finished my defensive scan of the area, one, and then another, calf ran from behind some trees to their mother’s side and positioned themselves for the perfect family portrait.

It had taken over 13 months, but we finally had our moose, and a few nice photos to boot.