It had been over two years since I visited one of my favorite places. The last two years have certainly taken us to many extraordinary destinations: exciting events like balloon festivals, film festivals and other wonderful festivals, visits at the homes of numerous family and friends, historic and hallowed battlefields, and beautiful national parks. But my memories of the place that I recently visited go back, way, way back, some 47 years. And this special place: The Friendly Confines of Wrigley Field.

My first visit to Wrigley was in 1969 at the age of 13 when the Chenoa Little League made a trip to Chicago to see the Cubs play the Atlanta Braves. A couple busloads of kids and coaches made the trip to the big city to watch the game on a warm Tuesday afternoon in August. The Cubs were in the middle of a pennant drive and every game was important. As a young Cubs fan it was incredibly exciting to see a game in their home ballpark, a place that up until this time I had only seen on television. A Cubs pitcher by the name of Ken Holtzman was on the mound that afternoon in front of a capacity crowd of over 37,000 fans and he did something that you rarely see in baseball, he pitched a no-hitter. My all-time sports hero Ron Santo, the Cubs third baseman, hit a three-run homer that were the only runs that either team would score that day. Before the game I bought a scorecard and pencil and my friend, Wes Wiles, showed me how to record the various events in the game using the scorecard and special symbols. I still have that scored score card recording the monumental event that we witnessed that day.

Last Saturday I returned to Wrigley to catch a game with Laura, Claire and soon-to-be son-in-law, Kyle, and see for the first time the changes that have occurred to the old ballpark over the past two years. And while we did not see a no-hitter on this occasion, the Cubs ace Jake Arrieta pitched a gem and the Cubs soundly defeated the Colorado Rockies. (As an aside, in his next start, against the Reds in Cincinnati, Arrieta would indeed pitch a no-hitter, the second of his career.) The ballpark now has two very large video boards in addition to the manual scoreboard in center field, as well as other “improvements.” It was a complete sellout and it appeared that the rooftops that rim the outfield walls were filled to capacity as well. I would also say that the excitement level throughout the game was as high as I have ever seen it. This is one special place and one special team. It was a wonderful afternoon of baseball and in addition to the game, we also had the opportunity to revisit a number of family traditions associated with the ballpark.

For as long as I can remember, I have been practicing certain rituals when I take in a game at Wrigley. If I am meeting someone, we will often rendezvous at a bar near the park and I will have an Old Style beer while we talk about the Cubs prospects for the season. Well in advance of the first pitch, I will head to the park and swing by the Ron Santo statue at the corner of Addison and Sheffield to pay my respects. While in the past, I would now enter the park, I now have another stop to make before heading in. As part of the renovation project, the sidewalks along Sheffield and Waveland are constructed of individual, personalized bricks, with the names of Cubs greats on large granite pavers inserted into the sidewalks every 20 feet or so. In addition to the statue, Ron Santo is also memorialized along Sheffield with one of these pavers, and for my 60th birthday Claire and Kyle had a brick inserted right above the paver for Mr. Santo that reads: F.R. JOLLY – OUR FAVORITE FAN, MUCH LOVE, C&K (A photo of the Santo paver and my brick is below.). One of the best birthday gifts ever. So going forward this will be a stop as well before walking around to the park to the main entrance at Clark and Addison where I always enter under the red Wrigley Field marquee that was installed in 1934. I then walk straight through the narrow concourse to the set of stairs right behind home plate and ascend them as the most beautiful vista in all of sports opens up: ivy-covered brick walls, vibrant green grass, the reddish dirt of the perfectly sculpted infield, the iconic scoreboard in center field and the rooftops beyond. I always pause for a few moments on that top step to take it all in.

So on this sunny and cool day I watched the game I love in one of my favorite places on this green earth, and saw the team from my youth win, something that is not always the case, but pure bliss when it does occur. But there was a moment that afternoon when I just sat in my seat down the left field line surrounded by the hum of the crowd, and thought back to that magical day in August, 47 years in the past when Wes Wiles and I snuck down into the box seating area behind the Cubs dugout to watch the last inning…Felipe Alou, the Braves first batter, hits a popup towards short that Don Kessinger catches for the first out of the top half of the ninth. Everyone is on their feet clapping and cheering and waiting for the next batter. The next hitter, Felix Millan, hits a sharp ground ball to Santo at third that he cleanly fields and throws to first for out number two. Only one to go as we watch Henry Aaron step into the batter’s box and smoothly take a couple of practice swings. Holtzman looks in for the sign. The sound of the crowd is deafening as he begins his windup and then strides toward the plate. The great home run hitter swings, but instead of driving the ball over the ivy-covered walls, he hits a sharp grounder to the right side of the infield that second baseman Glenn Beckert catches and smoothly throws to Ernie Banks at first for the final out. I throw my arms into the air and scream at the top of my lungs, but my screams of pure, unadulterated excitement are lost in an enormous black hole of collective sound.

Images from our afternoon at Wrigley Field are below. The last photo is of Claire and me taken back in 1990 on the occasion of Claire’s first Cubs game. She is three-months old.

A Day At The Park 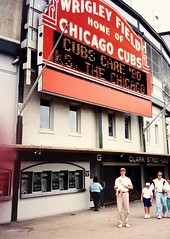