We have been on the move visiting three more national parks, and with so much travel and activity, I haven’t had time to write about what we’re seeing.  Well no more; here is the first of the four parks we are visiting in Winter 2016 in southern California.  [We visited the five parks in central and northern California in Spring 2015.]  Incidentally, it doesn’t feel like winter here — this coming week the highs will be in the 80s every day!  Now on to the park visit….

Plate tectonics and an old volcano are responsible for this park that has a rather strange story behind it.  It begins with the formation of the Pinnacles Volcano some 22-23 million years ago.  What is remarkable is that the volcano was born nearly 200 miles away from where we find the park today.  Pinnacles was believed to be some 8,000 feet high and the range some 15 miles long.  Over millions of years plates shifted directly below the volcano, splitting up the volcanic field and carrying two-thirds of the volcanics with it from the area that is today Lancaster, California, (down by Los Angeles) up some 175 miles north and west along the San Andreas Fault line to where the park is found today.  It is fascinating when you think of the geology behind this place… these rocks were all moved here v-e-r-y  s-l-o-w-l-y with the force of shifting and smashing tectonic plates, and that is why the unique spires and rock formations stick out, literally, from the more smooth foothills of the Gabilan Mountains surrounding these seemingly out-of-place pinnacles.

There are two entrances to Pinnacles; one on the west side and one on the east side.  No roads traverse Pinnacles NP, but hikers can connect the two sides via hiking trails up and over and around and through the rocks.  We visited the east side of the park on our way up to Salinas, then the west side on our way back down the California coast.  We hiked on the more popular west side, finding a combination of trails that made a nice, albeit very strenuous loop trail that took us up Juniper Canyon along a seasonal stream in the morning fog.  Through a patchy mosaic of native habitats (riparian, chaparrel and oak woodlands) we passed, making our way back and forth through the switchbacks and up some steeps to get up into the jagged pinnacles known as the High Peaks.  Along a particularly steep and narrow part of the High Peaks Trail, it was evident that the Civilian Conservation Corp (CCC) had been here, for they surely left their marks.  Steps had been carved out of hard rocks in some particularly challenging spots, and pipe handrails were installed to keep hikers from toppling off the sides.  If not for these aids, hikers would not be able to loop around these spires and high peaks, and once more we are grateful for the hard work of these CCC boys back in the 1930s and ’40s. 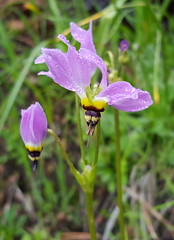 We experienced a couple more signature items in the park — some early wildflowers were in bloom, prairie falcons could be spotted, and amazingly we saw four rare California condors.  While my photos from my smartphone are pretty poor, they are proof, nonetheless, that these magnificent creatures with 10-foot wingspans are making a comeback from their once near-extinct status.  And I gotta tell you, it was absolutely exhilarating to hear the whoosh-whoosh-whoosh of the wingbeats I heard three times as three different condors took off from their hidden perches atop the volcanic pinnacles.  I stood in awe as I saw one, then a second, then a third condor take to the skies for the day; a fourth that didn’t take off could be seen atop a spire.  It was absolutely breathtaking…! 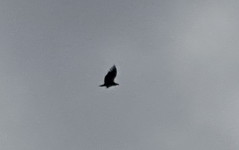 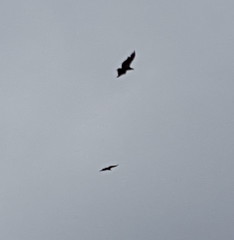 While this park is relatively isolated and can be hiked in its entirety in two days, it shouldn’t be overlooked.  Between the enormous rock spires and crags, the challenging hiking, and the condor sightings, the quiet beauty of this park could become addicting.