There are many parts to Petrified Forest National Park, from the namesake petrified logs that are strewn across the landscape… to Triassic treasures that show the fossil record of Ancient Arizona some 200+ million years ago… to petroglyphs and solar calendars left behind by Ancestral Puebloan people… to a historic inn that commemorates the nostalgia of Route 66… there’s a lot to like here in this park!

Two-hundred million years ago forces conspired to give us much of the desert grassland park that we see today.  But it was not always like this.  Once hot, humid, lush and green in the Triassic Period, this area was a prehistoric rainforest with abundant ferns, horsetails, cycads and ginkgoes.  Early reptiles and dinosaurs roamed in these parts as evidenced by the fossil remains found here, and giant conifers dotted the land.  But then time changed everything.  Tectonic plates shifted, moving the continents apart.  Giant regions uplifted.  Waters parted.  The climate changed.  And these plants and animals were buried by layers and layers and layers of sediment.

For millions of years, fallen conifers were buried beneath layers of sediment, thus cut off from the air and protected from decay. Over time – lots of time! – these buried tree trunks were permeated by water that contained silica which crystallized as quartz, thus turning the soft wood into a hard mineral. Today remnants of this prehistoric forest lay in sections of the park, giving it its name.

In addition to the petrified tree trunk pieces strewn across the desert sands, the desert sands themselves are a huge part of the park. This whole area is known as the Painted Desert, which features eroded cliffs of wonderfully red-hued volcanic rock known as bentonite; an absorbent clay.

In addition to all of the geological beauty that is found here in Petrified Forest, man-made beauty is present here, too. Thousands of years ago, Native American peoples roamed these lands, and while most of the stories of their lives here have been lost, some remnants remain including pueblos, pottery pieces, projectile points, and messages in stone. There are more than 1,000 archaeological sites here in the park. 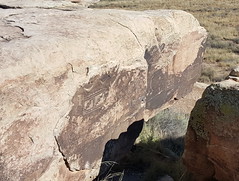 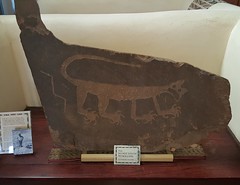 Finally, the Painted Desert Inn is another man-made treasure; certainly a worthy stop in the park to learn some incredible history about the trails, rails, and roads that came through this area. Take the story of Fred Harvey. He was a railroad man in the late 1800s, and increasingly dissatisfied with his meals and accommodations while traveling, he set out to revolutionize the hospitality industry. Beginning in 1876, his “Harvey Houses” were popping up all along the Santa Fe Railroad line, ensuring quality and comfort to traveling guests.

The Painted Desert Inn was built right next to historic Route 66 and the BNSF Railway between 1937-1940 by our national park heros, the Civilian Conservation Corps (CCC) boys who were stationed here from 1934 to 1941 to help improve the then-designated National Monument. In 1947, Fred Harvey took over operations of the Painted Desert Inn and immediately set out to update and enliven the place. Harvey Girls served at the dining counters, and thanks to the opportunities Fred Harvey gave them, were able to achieve financial independence through their work. For this and other contributions he made, Fred became known as the “Civilizer of the West.”

The Painted Desert Inn closed in 1963 after the romance of travel along Route 66 wore off, and a faster and more direct interstate highway system was  built.  Demolition was proposed in the mid-1970s (gasp!) but public protests prevented its razing, and it was reopened for limited use in 1976.  In 2006, after extensive renovation and restoration, the Inn opened as a museum and bookstore.  Today visitors can see efforts of the restoration, and beautiful murals on the walls, commissioned by Fred Harvey and painted by Hopi artist Fred Kabotie back in the 1950s.  While overnight accommodations and food service are currently not available at the inn, we can only hope that these services might one day be restored, as well. 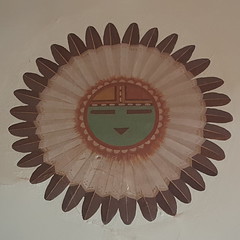 Indeed, there is a lot to see and history to explore here in this wonderful place, Petrified Forest National Park.