Salinas, California, has been on our “Must Visit” list for nearly as long as we have been dreaming about and planning for our Out There road trip.  Many of you know why, but I’ll let the rest of you know… it’s because we had to visit the inspiration for the name we gave to our motor home.

Charley, our RV, was so named after John Steinbeck’s travelogue depicting his 1960 road trip around the United States.  Travels with Charley: In Search of America inspired us and we knew we would make our own Travels with Charley memories on our journey by traveling in our Charley.  [Of course we know that Charley was Steinbeck’s French poodle and not the name of his pick-up camper; his was named Rosinante after Don Quixote’s bony horse.]

So today we finally arrived at our “Mecca” — the National Steinbeck Center in Salinas, John Steinbeck’s hometown.  In addition to his camper truck, the Steinbeck Center hosts a wonderful collection of artifacts, books, and film clips, and the exhibition hall walks visitors through the life and writing history of this Nobel Prize-winning author.  From his first acclaimed novel, Tortilla Flat (1935), the famed Of Mice and Men (1937), and his #1 bestseller The Grapes of Wrath (1939) for which Steinbeck won the National Book Award and Pulitzer Prize… and all the way through his travelogue Travels with Charley (1962), the Steinbeck Center shares this experimenter, philosopher, traveler and writer’s life. 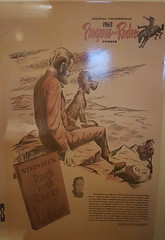 We thoroughly enjoyed our relaxed day in Salinas, known also as the “salad bowl” of the U.S. for all of the lettuce and other vegetables, nuts and fruits that are grown in this agricultural valley between two mountain ranges in Central California. Following our time in the Steinbeck Center, we walked two blocks over to the Steinbeck House which is now a charming luncheon restaurant staffed by volunteers of the Valley Guild who now owns the home.

Happy we were that we made the time to come up to the National Steinbeck Center today.  Seeing Rocinante made us grateful we’re traveling a little — ok, a lot! — more comfortably than John & Charley in our own Charley.  We are thankful, too, that we are taking a lot more time to explore our great country — we are truly blessed to be able to do so.

2 thoughts on “Our “Mecca” in Salinas”