August 5-8 – We’re here for a few days in Ohiopyle State Park, which, contrary to the name, is not in Ohio – it’s in southwest Pennsylvania.  We have a few state parks we’ll be staying at now until we get to our next national park, Acadia N.P. in Maine, just after Labor Day.

Ohiopyle – it’s both a State Park and a little borough that uses its old train station as a visitor center.  This area has something like 37 local residents, but it swells in size in summer months through tourism as some two million people come here to hike, bike, kayak, raft, fish, ride horseback, camp, and generally embrace nature.

Hover your cursor over the below photo and click on the arrows to scroll through photos of our time in Ohiopyle: 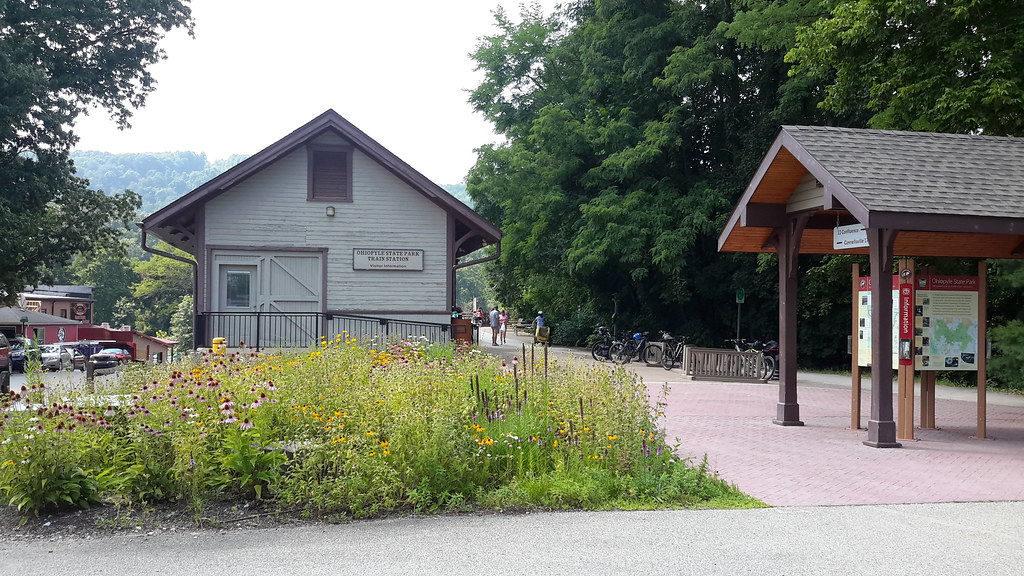 We did just about all of those things while here – all except for the fishing & horseback riding.  Leaving from the Ohiopyle Falls, we enjoyed a wonderful hike along the Ferncliff Trail in a protected natural area.  Fred took a second, quite difficult hike (and it takes a lot for him to call something ‘difficult’) on a different trail set and reported equally beautiful forested areas, rock formations, and vistas from which to see the winding Youghiogheny River.  We viewed many lovely waterfalls and waded in the pools below them, and watched kids sliding down a natural rock slide.  Incidentally, we had been advised not to do this, as while kids don’t seem to mind bumping and bouncing off rocks (ah, youth!), adults find those rocks far too hard on our aging bodies.  We opted, instead, for a whitewater rafting trip down the Lower Yough that featured 15 Class III/IV rapids – we stayed in the raft most of the time!  And finally, we visited Frank Lloyd Wright’s acclaimed commission, Fallingwater – would love the house; would hate the ongoing maintenance bills!

We stayed in a nice campground and really enjoyed camp life which included grilling out a couple of our meals and enjoying our campfires in the evenings.

For a little known place, this area offered BIG fun!