If we didn’t save the best for last, we certainly saved one of the best for last!  Nearly two-and-a-half years after we began our journey to visit all of the national parks, we have finally visited our last one — The National Park of American Samoa.

This was our last park primarily because it was the most difficult to get to.  It is south of the equator in the South Pacific Ocean; closer to Australia than to the United States.  Hawaiian Airlines flies there just twice a week from Honolulu, so our routing took us from Los Angeles to Honolulu for an overnight, and then on to Pago Pago [pronounced PAHNG-oh PAHNG-oh] the next day.  Elapsed travel time to reach this island chain was just over 24 hours for us, 12 of which were in the air.  Clearly, traveling to this national park requires commitment!

Because we had some difficulty trying to find out how to best visit this final park, I am going to provide more logistical details in this post for those readers who plan to tackle American Samoa at some point.  In fact, I will write two separate posts — this first one will focus on the geography and our experience in the park itself; the second one will share more of the fun, cultural things we did during our week-long stay in American Samoa, and provide some hopefully helpful information and links for travelers who plan to make the trip here themselves in their own quests to visit all 59 [at the time of this blog post] of our incredible national parks.

History and Geography — The Samoan Islands are part of Polynesia, and while they have been populated for over 3,000 years, they have only been known to the western world for a little more than two centuries.  Samoa is referred to as the Heart of the South Pacific, and it is believed to be where all Polynesian people originated.

The Samoan archipelago includes the independent nation of Samoa (formerly called Western Samoa) and American Samoa, a US territory approximately 60 miles to the east.  While both share a common language and culture, each has distinct natural features, and fun fact: because the international dateline separates these two nations, American Samoa is one hour earlier than Hawaii and Samoa is one entire day earlier.

American Samoa consists of seven primary islands: five rugged, highly eroded volcanic remnants and two uninhabited coral atolls. Visitors fly in to Pago Pago [airport code PPG] which is located on Tutuila [too-too-EE-lah], the main island, and this is where most of the 70,000 residents of American Samoa make their homes.

Pago Pago Harbor is a collapsed volcanic caldera and it is one of the largest natural harbors in the South Pacific. A steep mountainous spine runs the 20-mile length of the island with a few notable peaks including Tutuila’s tallest mountain, Matafao Peak (2,142′); Rainmaker Mountain (1,718′); and Mount ‘Alava (1,610’) looming over the harbor. There are a couple of main villages with hotels (just four on Tutuila), restaurants (maybe a dozen, including two McDonalds that, like in mainland U.S., are a favorite of all the children), markets, office buildings, banks, etc., around the harbor, and then many smaller, more primitive villages scattered around the perimeter of the island.

National Park of American Samoa — The National Park of American Samoa consists of 9,500 acres, virtually all of which is rainforest, on three islands.  Tutuila is where the Visitor Center and the largest tract of park land can be found.  Ta’ū (tah-OO) and Ofu (OH-foo), 60 miles east of Tutuila, are sparsely populated islands where a couple of villages have only a few hundred people.  American Samoa’s tallest peak, Lata Mountain (3,170′) can be found on Ta’ū, and Ofu features sand beaches and coral reefs with a mountain backdrop.  In addition to the steep cliffs and rainforest area, another 4,000 acres of the park are offshore and under water.

Visitors to the National Park of American Samoa see land that is largely undeveloped, and the facilities found in most national parks are lacking here.  A few park information kiosks and placards can be found, but by and large, this park is enjoyed “with a bit of the explorer’s spirit” as the park brochure suggests.

As is always the case when we visit national parks, we attempted to make the Visitor Center our first stop, but after walking a mile from our hotel (in temperatures in the high 80’s and with lots of humidity) we saw the sign on the door that they were only open Mon-Fri from 8 a.m. to 4:30 p.m.

But not to worry, we took photos of ourselves by the front door, then using our “explorer’s spirit” meandered around the town some and hopped on one of the “aigas” — the unscheduled buses (more about these in my second post) — to go explore around the town.

A couple of days later when we came back to the Visitor Center, we were very impressed with the educational content on display, and very pleased that a school with 5th – 8th graders had come on this day to learn more about the park on their island.

We engaged a bit with the students, and the teacher, Faia’i Vaeao, and made a plan to stay in contact with all of them at the Peteli Academy. And as a very nice surprise, once the rangers knew that this was our 59th park, they asked us if we could come back the next day as they would have something for us. We obliged and were absolutely thrilled when Rangers Pua Tuaua and Pai Aukuso-Reopoamo presented us with special certificates proclaiming that we had been to all of the national parks! 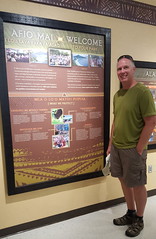 I’ll conclude this first post by sharing some of the photos we took while hiking on one of the few trails in the park area; this one took us 3-1/2 miles up through the rainforest and along the ridge line to the top of Mount ‘Alava where we enjoyed incredible views of the island before hiking the 3-1/2 miles back down.  We were joined by several new friends we made at our hotel, Sadie’s By The Sea — I’ll be writing more about that in my next post; this one is long enough! 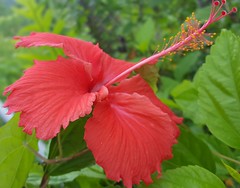 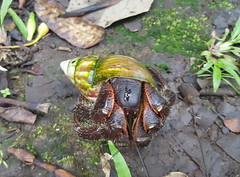 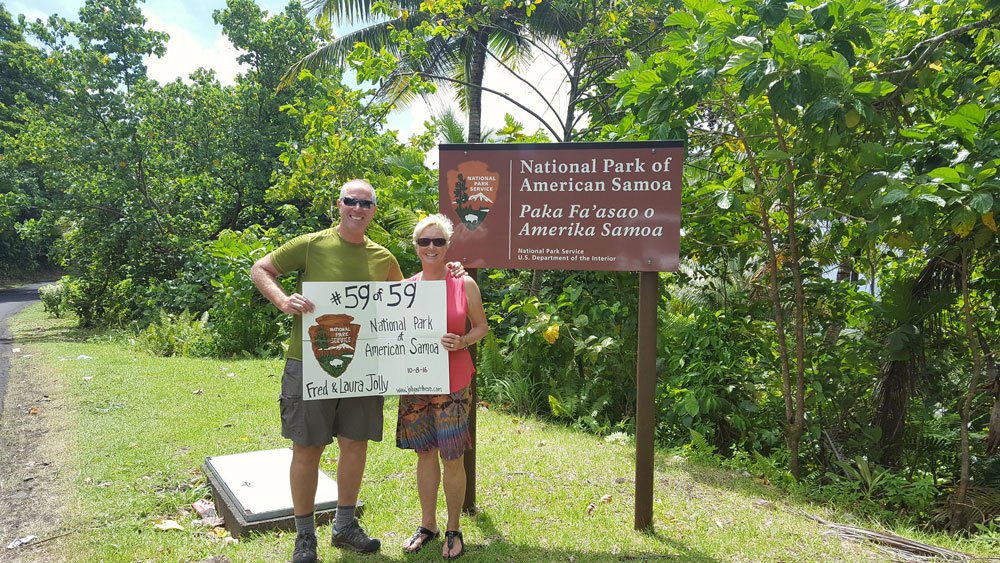 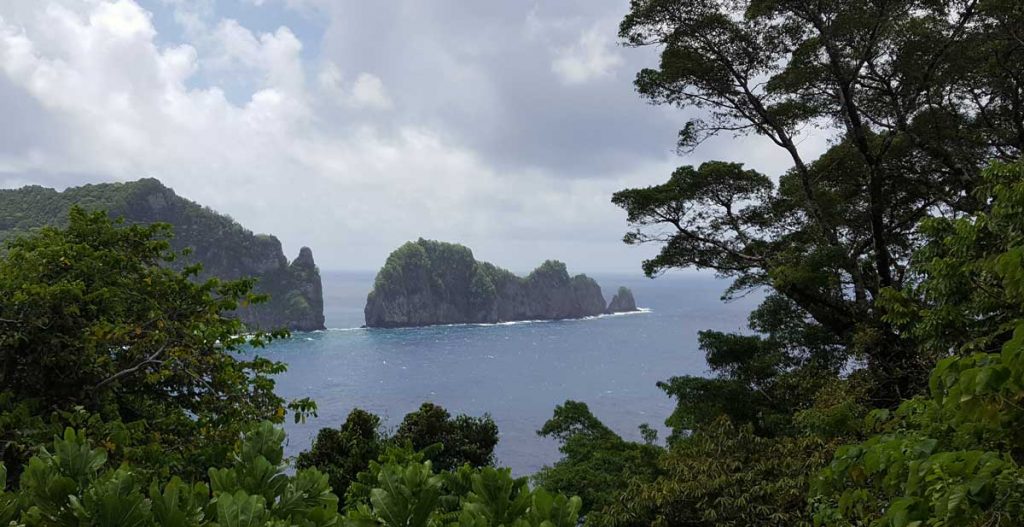 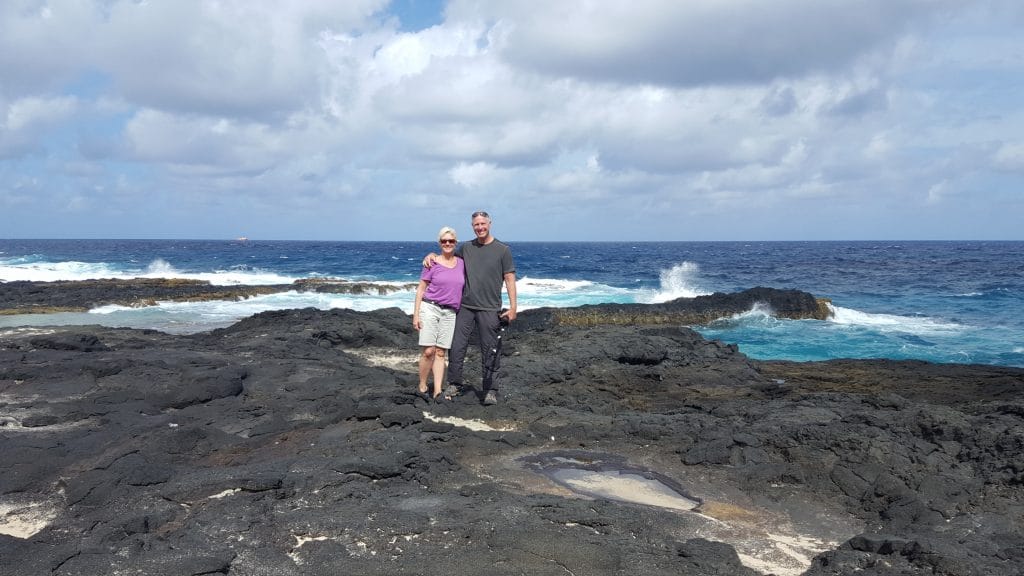