Our travels have taken us from the Pacific Ocean over to the Coachella Valley, and we are now less than 100 miles from the Mexican border in southern California.  [Incidentally we’re not quite sure where Mr. Trump is going to have the Mexicans build his big wall; it’d kinda ruin the stunning views from the mountaintops around here, but we’ll cross that bridge if we get there, I guess.]  So in addition to enjoying time in this warm and beautiful desert area for nearly three weeks this winter, Joshua Tree National Park is less than an hour away, so an extended stay here in the Palm Springs area works out perfectly for us, and we’ve set our circus down from February 2-20.  This is the longest we’ve stayed in a single place since we hit the road 20 months ago and we must say, we are finding our downtime in the desert very relaxing!

On to the national park….  The Colorado and Mojave Deserts meet here in Joshua Tree National Park but they are two different types of deserts so the appearance and the types of vegetation vary greatly here.  The western half of the park, at elevations above 3,000 feet, is the Mojave habitat.  The eastern half, below 3,000 feet, is the Colorado Desert which is part of the much larger Sonoran Desert which spans southern Arizona, southern California, and northwestern Mexico.  Whether in the eastern or western part of the park, relentless sun and little water define this place with daily summer temperatures reaching over 100 degrees.

The namesake for this park, the Joshua tree, is actually a distinctive species of yucca tree.  Joshua trees grow wild here in the park and surrounding Mojave desert area and can grow upwards of 5o feet high.  Like most other desert plant species, these trees have adapted to the lack of rainfall by extending their roots in a dense, shallow network to collect as much surface moisture as possible.  Their waxy, spiny leaves expose little surface area so this adaptation, too, efficiently helps the Joshua trees conserve moisture.

On the first day we visited the park, we got the lay of the land as we like to do.  While not planned, we ended up driving all the way through the park from the Cottonwood Visitor Center at the south entrance up to the Oasis Visitor Center in Twentynine Palms — strange name for a town, eh? — at the north edge of the park, making many stops along the way for short hikes and scenery stops including one for our sack lunches.  Who knew that after all these years I’d still enjoy a good ol’ peanut butter and jelly sandwich?  For that matter, who knew I’d still be eating a sack lunch?!?

Beginning our drive in the lower Colorado Desert, we viewed spidery ocotillo and a big “garden” of jumping cholla cactus.  Below are photos of the Cholla Cactus Garden: 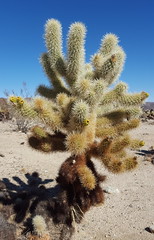 As we made our way north and west and crossed from the Colorado into the Mojave, we came upon the famed Joshua trees and jumbled stacks of granite boulders that are markedly part of this, the “high desert.” 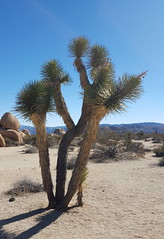 On another day in the park we participated in an activity that we always enjoy doing — we took a ranger-led tour.  This one took us into a part of the park that is otherwise closed off.  Keys Ranch is the remains of the ranch of a rugged homesteader, his wife, and their five children.  For nearly 60 years beginning in 1910, William F. Keys gave ranching a go, as well as any other work he could come by including mining, tool repairs, and “inventory” sales.  We heard the their colorful story and saw their remnants and relics scattered all over  everywhere.  From the looks of it there was not a piece or part or scrap of anything Mr. Keys didn’t think had value and therefore kept in case he needed it to make a repair or sell it to a neighbor to make a little money.  I give them all credit for their ingenuity and hard work, but I’m not sure why anyone would think this would have been a good place to settle.  The story goes that Mrs. Keys hadn’t seen the “ranch” before she agreed to marry Mr. Keys and live her life in this remote and forsaken place!  It was a fun tour and great place to take a lot of cool photos — below are a few from our visit to Keys Ranch.

I will close with a few fun facts about Joshua Tree NP: