March 18-20 — Guadalupe Mountains National Park is our last destination in Texas.  We drove through some rain to get here, which we didn’t mind, for Texas has been in a five-year drought and they need the rain.  Our drive wasn’t too lengthy, and we pulled in in time to get one of the first-come, first-serve parking spaces in the national park campground, Pine Springs.  If you arrive and there’s no spot, you’re about 35 miles away from the next campground up in White’s City.

Guadalupe Mountains National Park showcases the remote wilderness of the American West, and it is world famous for its geology; I’ll come back to that.  It’s quite far from anyplace around here, but we were very good with that.  We dry camped, meaning there was no electricity or water source at our campsite that sits in the base of Pine Spring Canyon inside the park.

As campsites go, this one resembles more of a parking lot than a campground, but we couldn’t beat the proximity to our hiking, especially when compared to Big Bend where we drove an hour to get to anywhere.  We ran our generator to heat our water for dishes and showers, and to provide a bit of heat to take the chill off in the early morning and later evening.  At this time of the year, the evenings are a comfortable-for-sleeping mid-40°s and the days are climbing into the 70ºs; it’s a wonderful time to be camping.

As I mentioned was the case of South Texas in my Big Bend post, this area, too, was under water some 250 million years ago as a reef on the edge of an ancient sea.  As the sea evaporated, the reef subsided, then was buried by a thick blanket of sediments and mineral salts.  The reef was entombed for millions of years, but then re-surfaced as a mountain range that today is like an island in the Chihuahuan Desert.  The Guadalupe Mountains, although not close to very much, attract geologists from all over the world who come to marvel at this extraordinary phenomenon.

Here in Guadalupe Mountains NP we hiked 15+ miles over two days and we must confess that we felt it, especially since the second day involved 8.4 miles of some strenuous rocky trails, some steep ascents, a rock scramble at the top, and all of this at altitude.  But hikers come here to tackle Guadalupe Peak, which, at 8,751 is the highest point in Texas, and we were here to do the same.  Unfortunately the morning we chose to summit began with a thick cloud cover that stayed with us for most of the day, but as the photos below show, we did managed to get some decent views. 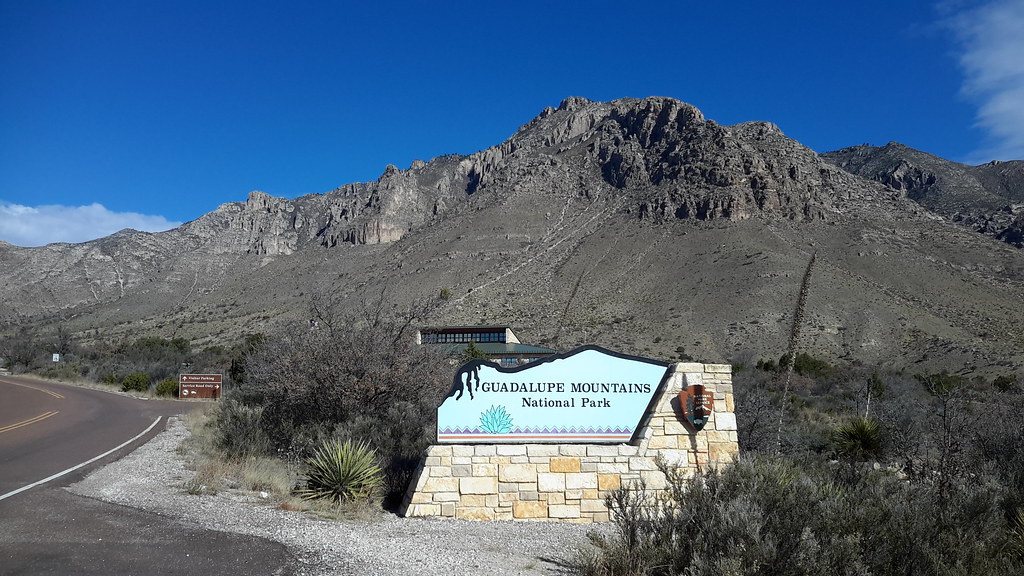