August 11-16 — The third and final leg of our honeymoon trip. Most people’s experience visiting the Grand Canyon is from the South Rim. That’s why Fred planned our visit to the North Rim – okay, in large part because it was closer to Bryce Canyon NP and Zion NP that were also part of this, our honeymoon trip, but also because this part of the park is far less crowded; only 10% of the park’s visitors visit from this side.

This translated into a much more leisurely stay at the park, which is just what we wanted. The mile-deep, 18-miles-wide immense gorge was visible from nearly everywhere we visited in the six days/five nights we spent here, and yet the scale is so vast that even from the best vantage point, only a fraction of the canyon can be seen. In total, the Grand Canyon is 275 miles long, carved out millions of years ago by the Colorado River. John Muir, considered to be the Father of the National Parks, summed it up rather well:

As with our other NP visits on this trip, Fred secured us a great cabin; make that THE cabin (#305) right on the rim.  We’re talking feet up on the railing of our front porch overlooking the vastness of this incredible place while rocking in our rocking chairs – breathtaking!!! And if this wasn’t enough of the good life, just steps from our cabin was the Grand Canyon Lodge. Upon our arrival we unloaded our belongings into our cabin and unpacked a bit, then headed up to the lodge deck to enjoy our first sunset.  As our great fortune would have it, the Grand Canyon Orchestra was about to begin a concert on the deck.  You have no idea how spectacular it was to be sitting in big Adirondack chairs facing the Grand Canyon while enjoying wonderful musical performances including Ferde Grofé’s Grand Canyon Suite.

Alright, all was not quite perfect on this trip….  As bad timing would have it, I got food poisoning the night before we trekked from Zion to Grand Canyon – it seemed our restaurant in Springdale hadn’t taken enough care in washing the greens in my salad, so I paid for it all night long and was completely wiped and weak for the next couple of days.  As a result, I was taken out of the strenuous hiking activities.  We did the gentle hikes of the Transept and Widforss trails nearby and got some nice photos, and we hiked Bright Angel to see and photograph the sunset one evening.  But Fred had to go solo on the big one, hiking five miles down the North Kaibab Trail into the canyon where he had his picnic lunch then hiked back up.  It was on this hike that he got a taste for hiking all the way down, and he’s now inspired to hike Rim-To-Rim on his 60th birthday.

In the “we weren’t expecting company” category, we had a mouse in our cabin – actually two!  We heard, and then saw our first little critter one night – snapped the lights on just in time to find that he somehow jumped/climbed/crawled up on the second bed in our room and was just about ready to enter my suitcase.  Well…!  I’m sure he was more scared of us than we were of him, but that didn’t stop the scampering about the rest of the night.  I spent the rest of the night periodically hitting my hiking poles together so the little guy was too scared to come out and find his way back into my suitcase!  Not wanting to alarm other guests in the cabins around us, we discretely told Housekeeping the next morning when we saw them.  The Housekeeping lady called over her radio for “RC-1” which we learned was code for “mousetrap” – I don’t understand the code system either; wouldn’t it be “MT-1”??  Anyway… Maintenance came with traps and bait (peanut butter), and we came back later to find one dead mouse.  Maintenance was good to remove him and re-baited the trap.  Then it was the middle of the next night when BAM! another trap sprang; another dead mouse.  We actually had to laugh at the whole thing; I mean if a mouse was the biggest of our animal problems while out in nature, we were actually doing pretty well.

On the other end of the spectrum from mouse is condor – just go with me on this…. The Grand Canyon is an important refuge for one of the world’s most majestic and most endangered birds: the California Condor.  One afternoon we were treated to an NPS Ranger talk about condors and their reintroduction to northern Arizona.  And then magically at one of the stops along the picturesque Canyon Rim Drive I was able to see and photograph one of these rare birds up close – okay, using a telephoto lens.  Fortunately, thanks to education and conservation efforts, condor populations are on the rise after decades of declines and near extinction.  Such a mighty sight, these birds!  For more reading on the condors.

There’s so much more about I could share about our time at the Grand Canyon, but those are the high points of this, our first visit together.  We’ll be back for the big Rim-to-Rim-to-Rim trip marking a milestone birthday for Fred.  We’re hoping we have our Chicago friends, Bill & Lisa F., talked into joining us on this next visit. Ahh… the grand Grand Canyon…! [Trivia for Mom: The North Rim is about 1,000′ higher in elevation than the South Rim.] 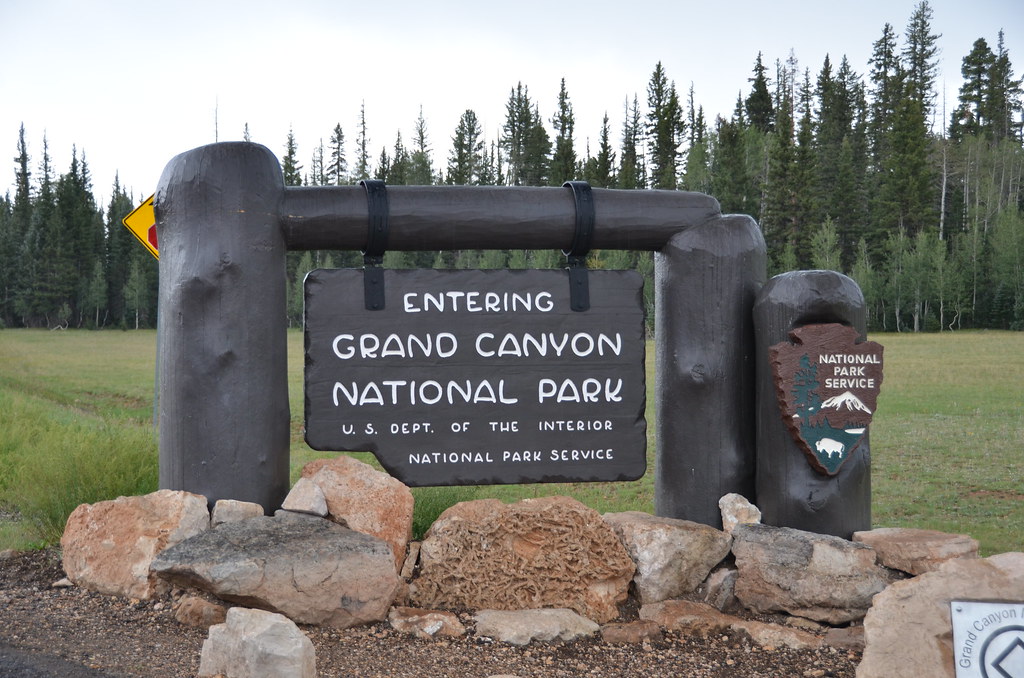