There is much to see in this park, but our visit primarily revolved around one activity: bear watching. Going into our trip to the park, we did not know that our stay would revolve around bears, but upon landing on the beach (no roads to this park) and exiting the bush plane, we could see a group of photographers a short distance away photographing a mother brown bear and her two cubs. As we made our way from the beach in a small cart being pulled by an ATV to the Silver Salmon Creek Lodge, which is right in the park and where we stayed, we could see the bears moving in our direction.

By the time that we pulled up to the lodge and got out of the cart, they were moving through tall grass a short distance from the lodge and heading right toward us. Everyone started scrambling to move out of their way and grab a camera. Just as the family of bears hit the perimeter of the lodge grounds, another brown bear came from the opposite direction right through the lodge yard and without hesitation, the mother bear went right at it. As the mother bear moved toward the other bear, the two cubs turned from the yard and ran down a dirt trail away from the advancing bear. While the two bears did not directly fight, there was much growling and baring of teeth before the threatening bear turned and headed back across the yard and into the woods. The mother bear then turned and followed after her cubs.

The above altercation lasted less than 30 seconds, but would be an exciting introduction to just how close we would get to these beautiful and powerful creatures over the next three days. I was typically out from 0630 to around 2200 each day with our guide and a couple from Holland who were also into photography. Laura joined us on a number of occasions, but did not spend the amount of time that we did riding around with our guide looking for bears. We watched them dig for razor clams on the beach, graze on tall grass in lush meadows, and the young ones in particular roughhouse with each other while their mother went about her business. One evening, we watched attentively as a large sow fished for salmon as the tide flowed out of a narrow inlet, hoping to get “the shot” if she were to lock onto a fish and then explode toward it. You can be the judge as to whether I was successful in capturing this moment in the second set of photos below.

I should also add that from the lodge and our cabin we looked out over Cook Inlet, which was not half bad either. Below then are a few photos from our visit. 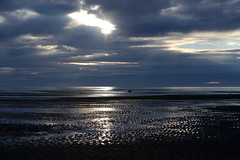 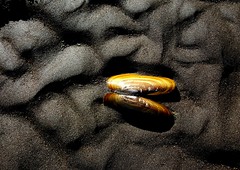 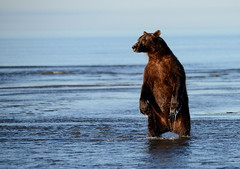 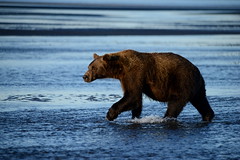 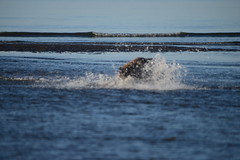 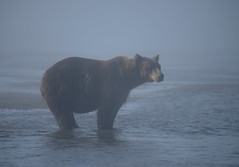 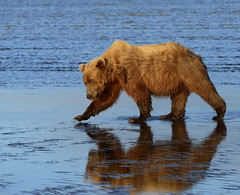 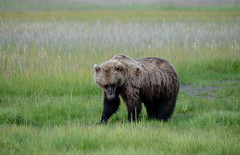 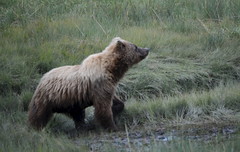 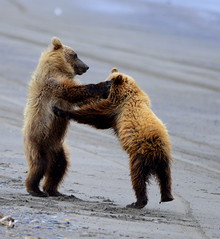 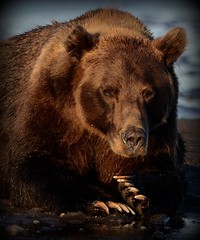