For most who come to Brooks Camp in Katmai NP in Alaska, it is about the bears. More specifically, the brown bears that congregate at Brooks Falls each July to await the sockeye salmon that make their way up the river and then must make a leap that Dwight Stone would be proud of to propel themselves to the rushing river above the falls. From there, they continue up the river to spawn. Only one small hitch, actually a rather large one, the aforementioned bears know when the salmon are spawning and position themselves at the falls to fill up with fish after the long winter hibernation. During the peak of the salmon run one might see up to 15 bears at the falls pouncing on unsuspecting salmon in the riverbed, and in some cases, standing on top of the falls and snatching flying salmon within their powerful jaws. I had seen film and photos of bears “fishing” at the falls, and very much wanted to be there in July to experience the spectacle firsthand. Unfortunately, a very large number of photographers also had the same idea and completely booked all accommodations at the lodge for every day in July… 18 months ago… within the first two hours that reservations were open. Since we could not arrange a stay in July, Laura, CLO extraordinaire that she is, did the next best thing, and made reservations for early August. We then commenced crossing fingers that the salmon and the bears would still be there when we arrived on August 3rd.

Well, we didn’t see the large number of bears that one might see in July, but we did see bears fishing at the falls, and as an added bonus, did not have to deal with the large crowds that visit Brooks Camp in July. It was actually quite nice as there were times when I was the only person on the viewing platform next to the river and falls. During July, this platform is jammed with photographers three deep who are limited to one hour shifts on the platform. While I didn’t see a large number of bears, the few who were there did their best to entertain. A few of my photos from the falls are below, as well as a couple of photos of a mother bear and her four cubs that we saw on an excursion near camp.

In some respects, it was fortuitous that we were not there during the height of the salmon run, because if that had been the case, it would have been difficult to pull myself away from the falls and the bears. This in turn would have kept me from seeing a really beautiful and dramatic part of the park: The Valley of 10,000 Smokes. This area is 40 miles into the park on a single-lane gravel road. In 1912 the largest volcanic eruption of the 20th century occurred in this area of the park and covered 40-square miles of the valley with ash and pumice, in some places 700 feet deep. Many super-heated pools of water trapped below the surface of the ash created steam that rose up through cracks on the surface, thus giving the area its name. While steam is no longer being vented on the valley floor, the ash still remains. In places, rivers and streams have cut down through the ash allowing one to gain a perspective on just how deep the ash is. We took a six-mile hike into the valley with a wonderful park ranger and we had him all to ourselves, as we were the only ones on the tour. A shame really, that hardly anyone ever makes the trip out to see this extraordinary landscape. A few photos from this excursion are below. 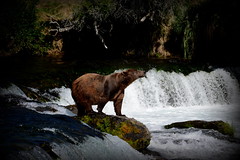 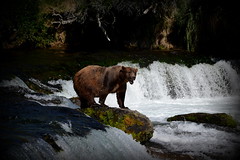 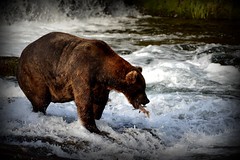 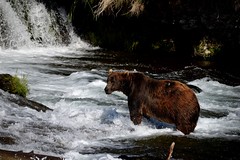 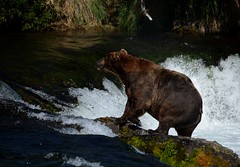 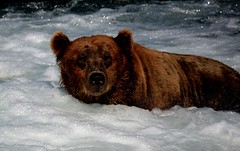 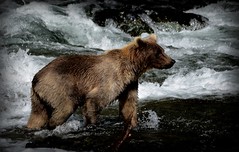 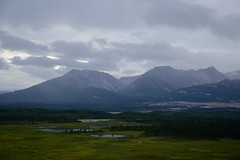 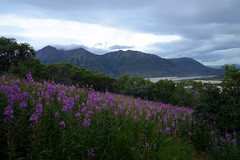 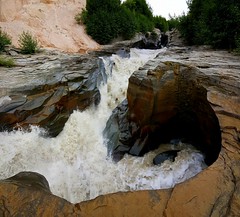 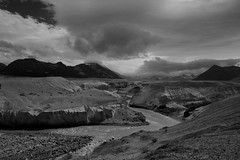 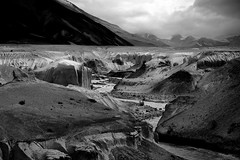 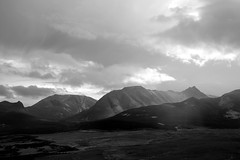 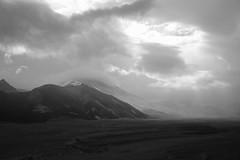