This is my second photo post on Grand Teton National Park, and includes photos from a rather challenging hike that I undertook, and a stripped-down perspective on a number of previously-displayed images.

The Paintbrush Canyon and Cascade Canyon Loop Trail in Grand Teton National Park, is a long, long hike. Laura decided to spend the day with Charley, so I endeavored to take on this 20-mile trek by myself. Beginning at 6,200 ft. at the base of the Tetons, I stepped off at 0700 just as the rising sun was painting the mountains a vibrant gold, and the bugles of rutting elk reverberated through the canyon. Loaded down with water, a water purification pump, plenty of food and bear spray (both grizzly and black bears roam these mountains), I began to make my way slowly up the rock-strewn trail under a crystal-blue sky. Temperature-wise, it was on the cool side as my car thermometer showed an outside temp of 30 degrees as I drove to the trailhead. Despite the chilly temperature, I found myself perspiring as I climbed, and climb I did. While the total hiking distance is 20 miles, the 4,500 ft. of elevation gain up to 10,700 ft. occurs in the first eight to nine miles. Who needs a hospital-stress test, when you have something like this to tax your system? It became even more interesting when I ascended above the tree line and gusting winds hit me smack in the face. But I finally reached the pass between the two canyons after four and a half hours of continuous climbing, with a few stops to snap a picture or two, and the views of distant lakes and mountains were truly spectacular. At the top, I did not dawdle because of the frigid conditions, and put on another jacket, a stocking cap and gloves, and began the very long walk down, which mercifully, was a nice, gradual descent.

Lunch was had sitting on a boulder out of the wind above the trail looking out over Cascade Canyon to the distant Desolate Lake. The lake was a cloudy green. I took my time with lunch, enjoyed the grand view and let my body absorb the warmth of the sun. A few fellow hikers walked by on the trail below me and one stopped to chat. I asked him how much farther it was to the trailhead, and after glancing at a detailed map of the area, he lifted my spirits by indicating that we only had five more miles to hike. However, my elation was short-lived, as upon closer examination of the map he apologized and said that the hike down would be at least another 10 miles. I set off walking down into the well of the canyon watching Desolate Lake become larger as I neared it and the view into the valley even more spectacular than that from above, as cathedral peaks were a backdrop to the glacier-strewn landscape spread out before me. I was walking into the remnants of millennia of earth’s evolution.

I continued down on the trail walking briskly wanting to finish this trek and my day’s work. After walking for some time, I approached a trail sign that I hoped would tell me that I only had a short distance to walk to my car. After all, I had been walking, forever. Not so, as the sign indicated that I still had exactly 6.2 miles to String Lake Outlet, the site of the parking lot. Damn. I had hiked 14 miles, farther than I had ever walked before, and still had six miles to go before I could call it a day. So I powered on, moving down the trail catching others who had opted for a shorter hike that day, and pacing myself behind a nice couple from San Francisco who distracted me with a constant stream of questions about our three-year odyssey. If they are reading this, I am hoping that they have been contemplating how they might themselves strike out on a similar journey.

Finally, I hopped onto the trail along Jenny Lake, knowing that I was nearing the end. It was a wonderful stretch of flat trail along a beautiful lake taking me toward the conclusion of this marathon. Along the way, I saw a father and son shedding layers of clothing, and then stopping to point just off of the trail. A white-tailed deer tentatively stepped from the brush onto the trail and then bounded off into the overgrowth of bushes and tall grass. The young boy was so excited to see the deer, and the wave of his youthful glee passed over first his father, and then me.

The end was in sight now as I caught my first glimpse of the parking area. I strode toward my car as others who had just arrived began what would be a one or two mile walk along the lake before dusk set in. It was approaching 1700 and I had been on the trail for almost 10 hours. Granted, I had taken almost 170 photos, which added time to the trek, but regardless, it was still a good day’s work. After a stretch of very tired muscles, it was time for this almost 60-year old body to make the drive back to Laura and Charley and a very cold beer.

It is the essence of a photo stripped to its core. No gimmicky, Photoshoped color, or other special effects, it is a raw image in the most basic of form and contrast and tints. A black and white photo reveals subtle texture and depth in an image. In the collection of black and white photos below, I have taken what has previously been captured in the color of the moment, and converted it into a more simple, but yet, arguably, more complex, format. The absolute master of the B&W landscape and nature format was Ansel Adams. During the Great Depression and World War II he was commissioned by the United States government to capture the raw, natural beauty of America. In 1942 he visited Grand Teton NP, and captured various images, including a photo of the Tetons and the Snake River as afternoon waned. How wonderful it was to stand where he did and attempt to capture my own moment. That image is below, along with others from this beautiful park, in binary color. 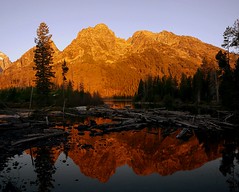 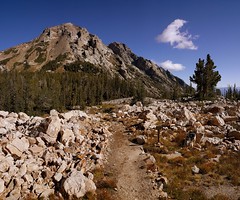 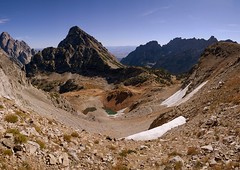 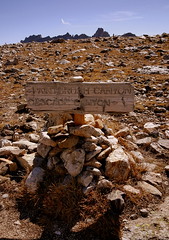 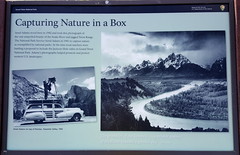 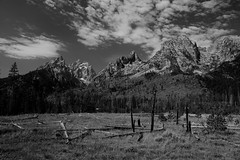 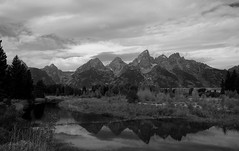 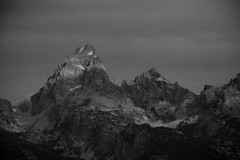 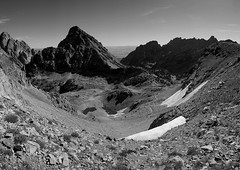 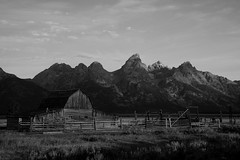 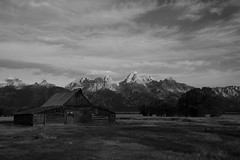 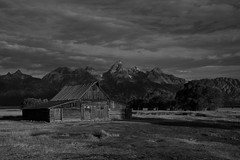