I had wanted to see it since I saw the movie Close Encounters of the Third Kind way back in the late 80s. Since then I have seen the film at least five other times, and a portion of it too many other times to count, and every time it came on the screen I would be reminded that it was still on my bucket list to visit this monolith in person. So on a July day as I drove on a winding state road through Wyoming, both Laura and I had our eyes peeled for the distinctive tower out the picture window that is Charley’s windshield. Finally, there it was, large and imposing on the horizon, Devils Tower.

Devils Tower is the namesake of Devils Tower National Monument, which was the first monument in the national park system. President Theodore Roosevelt designated it as a national monument in 1906 under the newly enacted American Antiquities Act of 1906. This was just one of many public lands that would be protected by Roosevelt during his time in office. Referred to as Bear Lodge by Native Americans, it was given the name Devils Tower by Colonel Richard Dodge in 1859 while escorting an Office of Indian Affairs survey team to the massive rock formation. Rising some 1,267 feet from the Belle Fourche River, it stretches 867 feet from base to summit.

So after over 30 years of this incredible formation residing on my to-do list, I was finally standing at the base of it and gazing up, way up. Making the experience even more special was that the campground where we set up camp was near the base of the mountain, and every evening at dusk the campground showed Close Encounters of the Third Kind on a large-screen television with the tower looming high above the makeshift outdoor theater. While I planned to get up very early the next morning to shoot the mountain at sunrise, there was no way that I could pass up watching the movie once again, this time with the star of the show as part of the experience. About half way through the film, a thunderstorm rolled into the area and it began to rain. While most others in attendance left, I moved under a tree and continued watching the film with three other brave souls. It was fun when Devils Tower made its first appearance in the movie and almost in unison we all said, “There it is.”, and clapped a few times. As I sat there I watched with one eye on the tower waiting for lightning flashes to illuminate it, and once again thoroughly enjoyed this wonderful film, one that is so full of possibilities and hope.

Photos from Devils Tower National Monument are below. 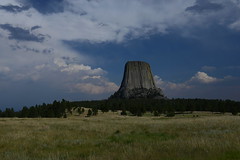 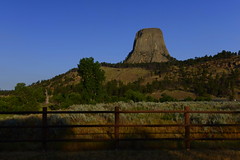 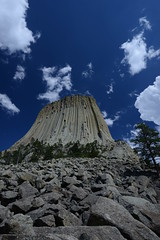 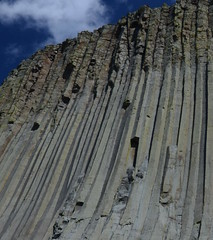 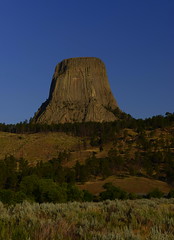 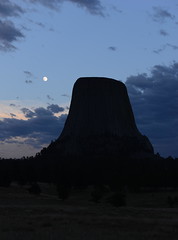 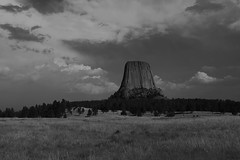 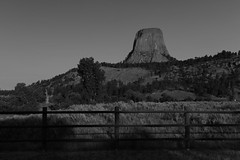 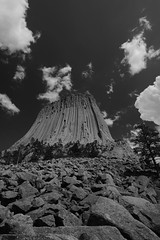