January 29 – February 25, 2013 — We’re on a month-long trip we’re calling our “Southern States Road Trip” with the purpose of trying to avoid some of the cold & just plain yukky Chicago winter.  We’re doing this “because we can” now that we’re retirees.  Yes, we know we’re very fortunate and very blessed to take a trip like this, and we’re also the envy of our friends and family members back in Illinois and Wisconsin as they continue to report snow and cold and ice while we enjoy temps in the 70’s, but hey, we’ve got a good gig and we know it and are grateful for it, so on we go….

A second purpose for this trip is to spend time in all three of Florida’s National Parks:  Everglades NP, Biscayne NP, and Dry Tortugas NP.  First up: Everglades.

On February 5th we drove across the Tamiami Highway, taking our time and stopping at each stopping point, Visitor Center, and potential point of interest such as the nation’s smallest post office in Ochopee.  Traveling from west to east as we were doing across the southern tip of Florida, the Tamiami Trail goes through the Big Cypress National Preserve, continues along the north perimeter of Everglades NP, and then wraps around the eastern edge of the park.

Everglades NP is like no other in that it is made up of some two-million acres of wetland with an elevation just a few feet above sea level.  It encompasses nine separate ecosystems and is home to more than 700 species of plants, more than 360 species of birds, nearly 300 species of fish, more than 40 species of mammals, and more than 50 species of reptiles.  [Facts courtesy of our National Geographic Complete National Parks book.]  Big Cypress National Preserve is a vast tract of land that is a continuation of the same habitats found in Everglades NP.  Fortunately, these two sanctuaries have been set aside and protected here in south Florida, not only for our enjoyment, but also to protect the incredible flora and fauna species found here.

Because Big Cypress is not part of Everglades NP, some activities are allowed here that would be prohibited in an NP, including hunting and cattle grazing.  We were hoping to see a Florida panther as they do roam these parts, but they mainly come out at night so we missed seeing one.

We are happy to report many alligator citings in this, the “river of grass” – anything less would have been a big disappointment, but not to worry, there were plenty!  We got out of our car several times for short hikes or just ‘gator observations.  Suggested by a very helpful NP ranger, we drove off road (really off-road down a washboard road for about five miles) to a place officially called Sweetwater Strand; I think the ranger referred to it as “The Garden of Eden” – and it certainly was!  This little area was so undisturbed; a little water source where we found herons, egrets, ibis, alligators, turtles, ducks and many other marine animals and birds totally in their element – the area was gorgeous and we stayed for nearly an hour just observing nature in all her glory.

We enjoyed a picnic lunch at the Oasis Visitor Center – one of eight visitor centers in Everglades and Big Cypress.  Of course, I had to get my National Passport stamps at each of these points, and I was very pleasantly surprised that each center had fun animal stamps in addition to the official date stamp.  With my obsession of my stamps, you’d think I was eight years old!  Oh well, I’m having fun collecting them at every National Park area we visit.

Our final activity of our second day in Everglades was to rent bicycles and bike the 15-mile loop in Shark Valley.  Here in the Shark River Slough there were no sharks, but plenty more alligators (including lots of babies) and the endangered, less-than-beautiful-with-its-odd,-naked-head wood stork.  We thoroughly enjoyed the day, especially the bike ride and all the wildlife we saw on it, and want to do it again at some point. 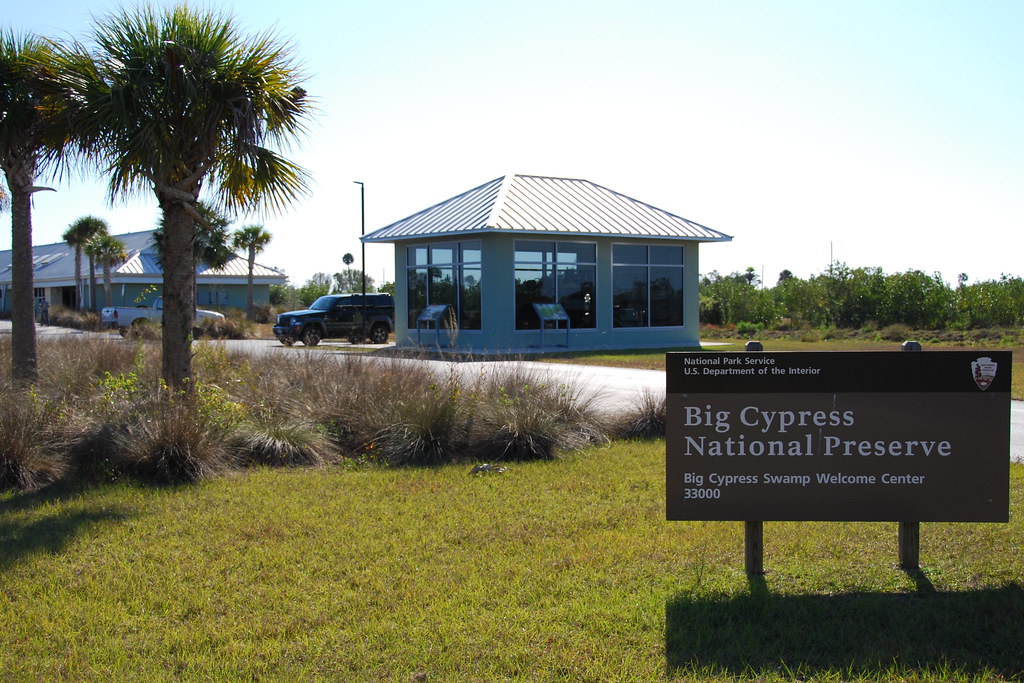 On February 6th, our third day in Everglades, we approached it from the east side, near Homestead, FL.  As always, we checked in at the [Ernest Coe] Visitor Center to map out our day trip, got Passport stamps, and then set out to visit each of the stopping points en route to the Flamingo Visitor Center at the southern tip of the state of Florida.  We had nice walks on the boardwalks at Pa-hay-okee Overlook and Mahogany Hammock where we enjoyed learning more about this special place.  We saw bromeliads (air plants) in trees, Cypress bogs, rivers of sawgrass, and lots more egrets, ibis, herons, wood storks, and of course, alligators.  We enjoyed our picnic lunch at Flamingo, then drove back up to Royal Palm where we enjoyed the nature and wildlife along the Gumbo Limbo and Anhinga Trails. 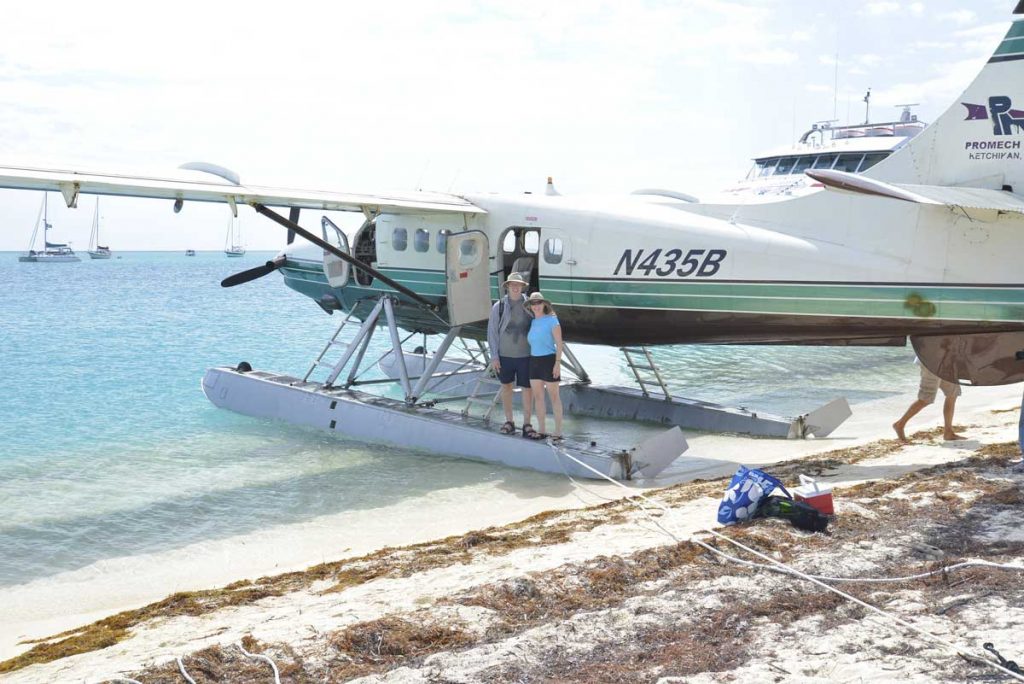 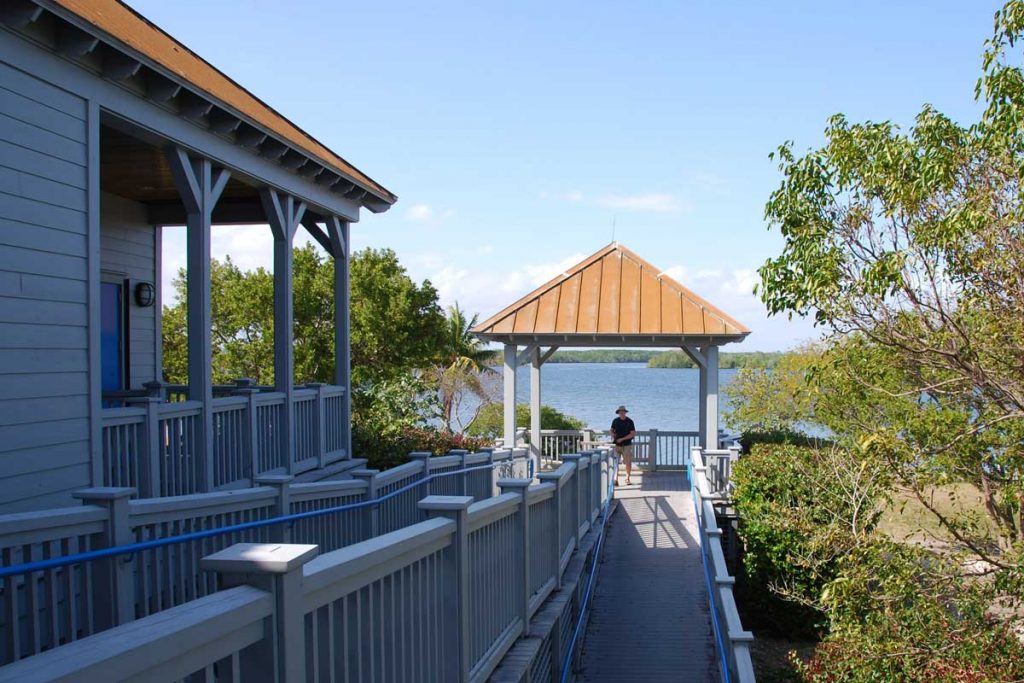 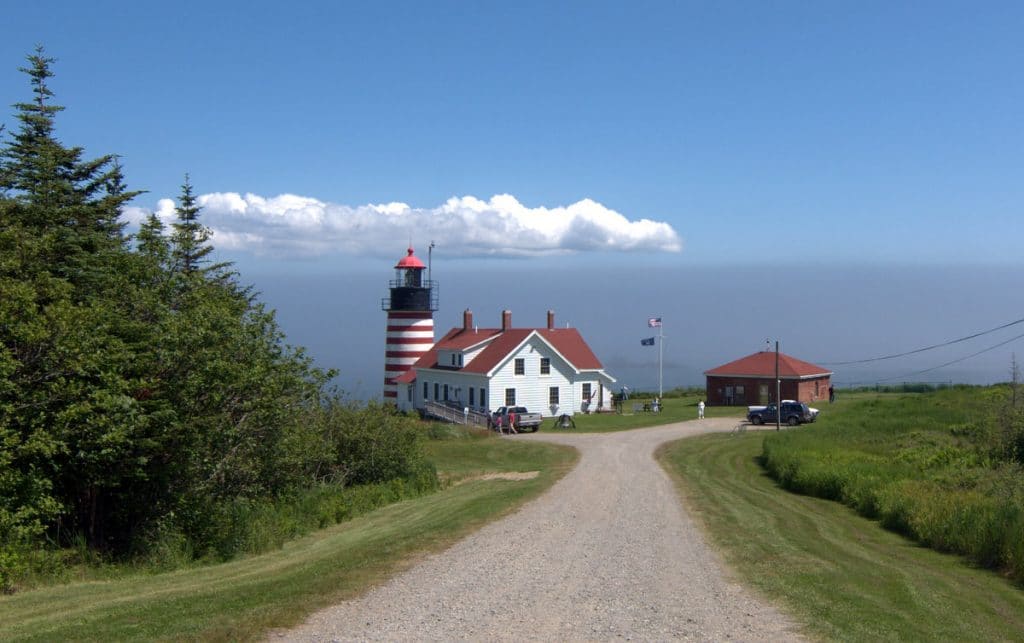