We’ve gone from temperatures in the high 80s and needing air conditioning for the past several days in Kanab, Utah, (elevation: 4,970) to waking up this morning to a temperature in the low 40s and needing to turn on our furnace again — what a difference a few thousand feet make!  We are now in the Kaibab National Forest about 45 miles north of the North Rim of the Grand Canyon (elevation: 8,297) where we’ll leave Charley for a few days while we work our way from the North Rim to the South Rim — Fred on foot tomorrow; me in Toad as I drive around the canyon and we visit the South Rim for a few days.  On Friday we’ll drive back around the big canyon, spend one more night here in the forest, then head on to our next Out There adventure….

While the South Rim and surrounding facilities stay open all year long, the North Rim shuts down over the winter.  But the North Rim opens back up today and already the surrounding campgrounds are pretty full.  We visited this North Rim area back in the summer of 2012 as part of our two-weeks-to-visit-three-national-parks honeymoon trip, and I remember being here in the Kaibab National Forest and learning about the famed tassel-eared, white-tailed squirrel that lives here on the Kaibab Plateau and nowhere else in the world.  Well this morning as I was sitting here in my front seat gazing out the window with my first cup of tea in my hand I saw him!

This is the view out Charley’s front windshield at our campground in Jacob Lake:

I’ll get some breakfast started soon here, we’ll pack up Toad and button up Charley, then we’ll head down the road to the North Rim.  There we’ll check into the lodge for one night and relax for the afternoon as Fred is trying to stay off his feet as much as possible.  [With the rim view from the lodge that we know we’ll have, I don’t think it will be too hard for us to relax this afternoon!]  We’ll have a nice dinner at the Lodge and Fred will be lights out pretty early tonight.  His big hike is tomorrow…!

The photo quality isn’t the best as I snapped these around 6:30 a.m. out our (dirty!) front windshield; here are a couple more quick snapshots of this rare little creature

— I finally saw him

This is my rendition of him from my sketchbook back in 2012 — it was the best I had until now: 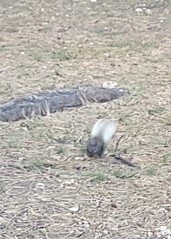 90 MINUTES LATER:  I’ve been so excited to have seen the Kaibab squirrel this morning, and he has come back into our little view of the Ponderosa pine forest several times.  But now I’ve been lamenting that my photo of him isn’t good enough.  Handy isn’t it, then, that I know a guy with a huge telephoto lens?  So I did what any wife would do — I sent Fred out with that huge telephoto lens to get me a better shot of Squirrely.

Here’s him heading out to get a shot for me:

And here’s the shot he got:

2 thoughts on “Elevation Change and a Little White-Tailed Squirrel”