We spent nearly a month here this past week!  That’s an old joke, I know, but it is rather fitting in this circumstance.  Actually Death Valley National Park isn’t such a bad place to spend a week, but I’ll confess Fred was a lot more into it than I was.  The name gives it a bad rap, to be sure, but it is the largest national park outside of Alaska, and in spite of the forbidding name there are many parts of this big place to enjoy.

One intriguing aspect of this park is the extremes.  Death Valley is officially the hottest place on earth, holding the world record for the hottest air temperature of 134°F.   It is the driest place on earth, with average rain amounts of just two inches.  It is also the lowest place in North America.  Badwater Basin, in the heart of the park, lies 282 feet below sea level!

As we drove into one of the southern entrances to the park we came upon Zabriskie Point.  It’s one of the most popular spots to pull off, park, and walk up a little pathway to get incredible views of the erosional Amargosa Range, The Valley, and Panamint Range in the background.  This area was once ancient lake beds deposited five to ten million years ago that have been tilted and pushed upward by earth forces and eroded by wind and water.

Another very popular place in the park is Badwater Basin.  It takes its name from the spring-fed pool of “bad water” next to the road.  Salt accumulates in the surrounding basin making the water undrinkable.  Visitors to this area can walk out into a section of the nearly 200 square miles of dried salt flats.  As mentioned above, this is the lowest point in North America — we’re pictured next to the sign showing 282 feet below sea level.  Interestingly enough, Mount Whitney, the highest point in the contiguous U.S. is just 84.6 miles away.  Yet another ‘extreme’ in the park. 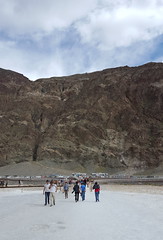 Another iconic place in the park is Artist’s Palette.  It’s an area on the face of the Black Mountains known for a variety of rock colors.  Pastel purple, pink, yellow and green all show up thanks to the oxidation of different metals in the rocks.

While I was pleased with what we saw, we did miss two areas of the park that would have been cool to see.  One area, Racetrack Playa, is a seasonally dry lake located in the northern part of the Panamint Mountains.  It is famous for rocks that mysteriously move across the ground, making notable grooves and patterns in the ‘racetrack.’  While I’m sorry we didn’t get to see this iconic site, getting to the remote playa requires 25+ miles of travel on a rough road that warns of needing heavy-duty tires.  We had flashbacks of our flat tire in Toad 25 miles away from nowhere, New Mexico, and Death Valley didn’t seem like a good place to experience another so we skipped The Racetrack.  The other famous feature in the park that we were planning to see is Scotty’s Castle, an improbably ornate Spanish Mission villa built in a nearly-impossible location.  Unfortunately heavy rains back in October completely washed out the road leading here and caused flood damage to the property as well, so this area was out, as well.

But all was far from lost with our visit.  As fortuitous timing would have it, we were here during the happens-once-every-decade “super-bloom” of wildflowers.  The punch of yellow gave the park some nice life; I can’t imagine what it would be like without that color! 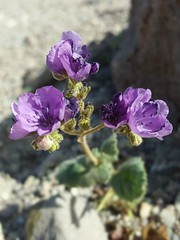 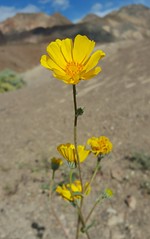 Fred went into the park several times without me which was fine — he’s training for his big Rim-to-Rim hike at the Grand Canyon coming up in two months, so he enjoyed a couple of strenuous hikes on his own.  Me, I spent my month, I mean week, reading a couple of books as our campground had no Verizon signal and no TV signal.  Did I mention it was a long week?!?  Seriously, Death Valley National Park is a great park and I have a feeling we’ll come visit again to see more of this unique beauty.