I mentioned in a previous post that Silver Salmon Creek Lodge in Lake Clark National Park turned out to be my favorite of all of the places we stayed during our 5-week Alaska trip during which time we visited six of the eight national parks up here. The primary reason is because this place gave us a taste of true off-the-road-system, out-in-the-middle-of-nowhere wild Alaska. But it is also because of the hospitality we received while staying here.

SSCL proprietor David Coray bought the establishment back in 1983 and has, together with his wife Joanne [who unfortunately was not here during our stay and so we never got to meet her], been operating the lodge as a wilderness recreation destination since that time. The staff they employ is first rate, and their guests’ comfort and happiness is what they all strive for. Here’s what I mean:

Seeing how I wasn’t into photography as much as the others who had come here specifically for the opportunity to get award-winning shots of bears in their wilderness habitats, a couple members of David’s staff asked me if I wanted to go clamming with them. As one who always enjoys trying new things and being open to new experiences, I, of course, said yes! They outfitted me with chest waders and off we went to the beach in search of some good clam beds. David and his son, Oliver, showed me how to do it and with that I was clamming! We found a clam bed rich with razor clams, and six of us were able to fill three buckets with clams in very short order. Bears love to eat clams, too, along with the salmon they catch, and the razor clams found here are some of the best eating clams in the world.

I did feel a little guilty for taking some of the food the bears count on to fatten up for winter, but there were plenty of clams out here, and these few resident zone communities have a long history of using resources in the park for sustenance. And if David said it was okay to enjoy the riches of these clam beds, then who was I to challenge a guy who has lived in Alaska since he was a wee tyke?

Sad was I that I didn’t get to enjoy any of the fruits of all our labors, but I did participate in cleaning some of them — a process that took several people hours of work — and it looks as though the SSCL chef got lots of nice clam meat for treating several of his next sets of guests to some good Alaskan clam chowder! 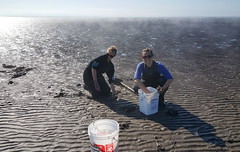