The second of the four remaining parks we are visiting in Southern California this winter, Channel Islands National Park is another one that started out as a national monument before being designated a national park in 1980.  The Channel Islands is a set of eight largely undeveloped and unpopulated islands found off the coast of Santa Barbara / Ventura / Oxnard, accessible only via an authorized NP concessionaire tour boat, private boat, or the small airport on the island of Santa Rosa.  These islands are a sharp contrast to the bustling mainland nearby.  Because of the isolation, the park is lightly visited, which was just fine by us.

We chose the boat ride, and even though we knew a storm was blowing in from the west and the seas would likely be pretty rough, we knew we couldn’t delay our visit since we were in the area for only two more days.  With the following day’s forecast models calling for 100% chance of rain and even higher winds, we went for it anyway.  Once we cleared Oxnard harbor, it did indeed turn out to be a rather rough ride with many people getting seasick (but not us; Navy boy and boater girl!), and it took a lot longer than planned due to the big swells aiming right for our bow the whole time. 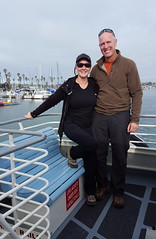 But our skilled captain got us through it, and after 90 minutes of pitching and rolling in swells that got to 10+ feet high we finally made it to the calmer waters of the leeward side of Santa Cruz island.  And then low and behold, the skies cleared up enough to allow for some afternoon blue and we were able to enjoy a splendid few hours hiking around the Scorpion Ranch area on the eastern side of this island.  A small group of us joined a park volunteer who walked with us up to an area called Cavern Point and as always, we enjoyed the stories he shared with us about the island’s history and its inhabitants; both past and present.

The islands are often called the Galapagos of North America for never in their development did they have contact with the mainland.  They have more than 2,000 species of plants and animals; 145 of them not found anywhere else in the world.  While each island is different, we ‘chose’ Santa Cruz, or rather it was chosen for us as that’s where the boat was heading on the particular day we visited.  In the more popular summer season, we figured there would be more choices and options, but we were just fine with “our” island.  The largest of the five primary islands that are visited, Santa Cruz extends some 22 miles long and from two to six miles in width, so we were only able to get around a few miles of it on foot.  Santa Cruz is known for its biodiversity, a deep sea cave, the Santa Cruz island fox [each island has its own endemic fox species], and the historic ranches that still stand a century later.  Today the National Park Service and Nature Conservancy preserve and protect the island together.

Following a quick visit to the island’s Visitor Center [there are also a couple more on the mainland in Oxnard and Ventura] for our passport stamp, we spent most of our time hiking, always on the lookout for the famed island fox.  Then just before we got back to the beach where we were to meet our return ride, there he was!  My beloved “Fransel” captured better close-ups of this miniature fox (he’s smaller because he doesn’t have any natural enemies out on the island), but I like the shot I captured of him getting his shots! 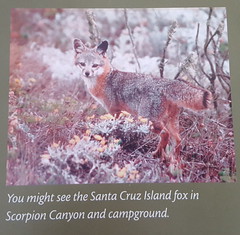 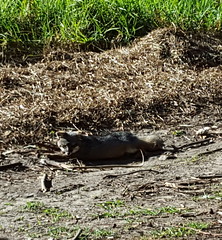 Below is a mosiac of photos from our hike out on Santa Cruz.  If you click on a photo, you can see a larger version of it.  You can also use the arrows at the bottom (click on the photo if they disappear on you) to scroll through all the photos in the photo series.  To close the series, click on the ‘X’ in the top right corner. 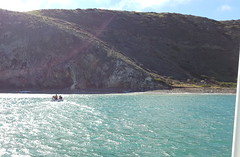 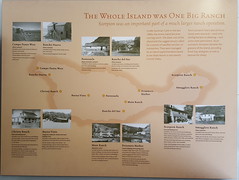 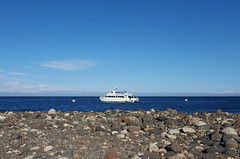 What started out as an “iffy” weather day turned out to be a beautiful day on one of the Channel Islands after all!  Thanks to our hiking buddies, particularly Anne M, who had a rough start but rallied like a trooper and carried on with her head held high.  On to bigger and better, Anne!