It’s November 1st — where has the month of October gone?!?  We are currently exploring the American Southwest, specifically the Four Corners area that is Utah, Colorado, Arizona and New Mexico.  During the fall we have had the opportunity to visit two more national parks — Capitol Reef National Park in Utah and Petrified Forest National Park in Arizona — and several more national park units.  In fact, we’ve tallied up 11 more of these gems that, for various reasons, have been set aside as special places that are to be protected by our U.S. government for visitors like us to enjoy.

Here’s a look at the eight national monuments and three other national parks units that we visited in the month of October — it was clearly a busy sight-seeing month for us!

If you click on a photo, you can see a larger version of it.  You can also use the arrows at the bottom (click on the photo if they disappear on you) to scroll through all the photos in an album.  To close the album, click on the ‘X’ in the top right corner.

Oct 1 — Natural Bridges National Monument protects one of the largest natural rock bridges in the world, known as Sipapu, and two others, Kachina and Owachomo.

Oct 6 — El Malpais National Monument was closed for the winter, the Information Center anyway, but we enjoyed a drive through the rugged beauty of this area known as “the badlands” of northwestern New Mexico.

Oct 8 — Chaco Culture National Historical Park protects an 11th century Puebloan community in the high desert of New Mexico’s Colorado Plateau.  The 20-mile dirt and rock road leading out to the NHP is also where we blew a tire on Toad — see A Heck of a Place for a Flat post.

Oct 11 — Hubble Trading Post National Historical Site is an authentic 19th-century trading post on the Navajo Nation in northeastern Arizona that is still in operation today and features, among other things, beautiful Navajo rugs for sale to the visiting public like us, as well as the local Diné peoples today.

Oct 13 — Walnut Canyon National Monument is the site of cliff dwellings built along the rim of a 350-foot deep canyon by the Sinagua people around 1100 A.D.

Oct 15 — Sunset Crater Volcano National Monument protects a cinder cone volcano that erupted 900 years ago, and the area that surrounds it.

Oct 15 — Wupatki National Monument protects Native American pueblos built by the ancestral Hisatsinom people; it was a 12th-century center for trade and includes a “tall house” and the reconstructed remains of an ancient ball court.

Oct 19 — Glen Canyon National Recreation Area is a sprawling reservoir that was created when the Glen Canyon Dam was built on the Colorado River thus creating Lake Powell.  Although this 1.2 million acre NRA is mostly vast desert backcountry, the primary activities in the park are concentrated on the waters, and it includes the one-of-a-kind Horseshoe Bend on the Colorado.

Oct 28 — Kasha-Katuwe Tent Rocks National Monument features “tent rocks” formed by erosion of ancient volcanic rock and ash; some of them up to 90 feet tall.  With our Vermont friends, Stan and Pam, who were visiting us in Santa Fe, we hiked up the slot canyon surrounded by these “tents” to get to the top of the mesa where we enjoyed incredible 360-degree views of the Cochiti tribal lands below and of the Pajarito Plateau of northcentral New Mexico that was all around us. 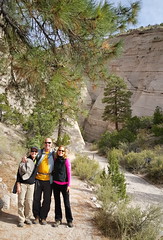 Oct 30 — Petroglyph National Monument is a fabulous assemblage of stone carvings — more than 20,000 of them — just west of Albuquerque in three separate canyon locations.  Most were created by ancestral Puebloan people, but a few were added by the Spaniards once they came to this region in the mid-1500s.

Clearly, October was a terrific travel month for us Jollys, and we are now in our eighteenth month of living Out There in our RV. I would be remiss if I didn’t repeat, once again, how very fortunate we are to be able to visit places like this. The history we glean from seeing first-hand Native American pueblos, cliff dwellings, rock art, trading posts, and other relics of the First Peoples of our country is crucial for understanding, respecting, and honoring our past, as well as acknowledging some of the sins of it.