October 23 — For a long time now, a return trip to Winterthur in Delaware has been on my list of come-back-to places.  Winterthur is a combination of museum, gardens, and a library developed by Henry Francis du Pont, one of the heirs to the du Pont fortune, who was born here back in 1880.  [Trivia for Mom (it’s been awhile!) – The E. I. du Pont de Nemours & Co. company was started by Eleuthère Irénée du Pont who came to the U.S. from France in 1800.  He had nothing, but knew a little something about black gunpowder.  The rest is history, and it resulted in gazillions of dollars for the du Pont family.]

About the museum: Henry du Pont married Ruth Wales in 1916, and began collecting American decorative arts and architectural elements, no doubt thanks to great-grandpa Eluthère’s booming (no pun intended) success.  Henry inherited the property in 1926, and greatly expanded it between 1928 and 1931 into what today is an 8-story, 175-room mansion.

Into all these rooms Henry installed important interiors from early American houses and filled them with his burgeoning collection of American antiques which date from the 1640’s through the 1860’s.  Throughout the next two decades, Henry, Ruth, and their two daughters lived in their museum-in-progress.

In 1951, Henry Francis du Pont opened his house to the public as the Winterthur Museum.  The family moved into a smaller home on the grounds called the “Cottage,” which serves as the Museum Store today.

In 1961, First Lady Jacqueline Kennedy visited Winterthur and invited Henry to head the Fine Arts Committee which oversaw the restoration of the White House.  Until his death in 1969, Henry spent time at Winterthur and in several of his other homes in the U.S.

Today the collection numbers over 90,000 objects.  A variety of tours are offered to see parts of the house, and other wings feature their large collections.

About the gardens: a 1,000-acre estate with streams, rolling hills, meadows, and forests, planted with choice plants from all around the world.  Henry viewed himself the master gardener, even though he had plenty of help maintaining Winterthur.  A life-long devotee to horticulture, he arranged his plantings in lyrical color combinations and carefully orchestrated a succession of plants that bloom from January through November.  If you visit – and you should! – be sure to take the 20-minute garden tram tour that will take you through the 60-acre naturalistic garden, Azalea Woods, Magnolia Bend, and the Enchanted Woods designed especially for children.

About the library:  The preeminent research library and graduate programs make Winterthur an important center for the study of American art and culture.

About Downton Abbey:  As good timing would have it, we visited Winterthur during the Costumes of Downton Abbey exhibition that featured 40 historically-inspired costumes that were featured on the show.  These were supplemented by photographs and vignettes inspired by the fictional TV program and real life at Winterthur.  Now I finally know what a valet and footmen do!

P.S. In case you’re noticing that outside garden pictures are missing, you are right.  There are two good reasons for this: 1) we visited Winterthur as the ol’ Nor’easter was passing through the east coast, so our outside time was pretty much limited to the tram ride; 2) they are replacing all of the windows on the mansion/museum, so the whole thing was covered up with green safety netting – not very attractive for photos.

Saturday, July 26 — We awoke to our 7 a.m. alarm and the pitter-patter of rain – not what we wanted to hear.  We had planned to do some nice hiking at Pictured Rocks and were hopeful that the good forecast predicted for today would hold up, but the sound of the rain wasn’t promising.

Deciding this wouldn’t deter us, we grabbed egg sandwiches at Subway then made our way to our first destination – Munising Falls.  The short little walk up into a canyon paid off and we were rewarded with a beautiful waterfall.  Rangers at this location helped me identify a couple of the wildflowers I kept seeing – bunchberry and cow parsnip – and after visiting a bit more with them, we hoped the rain would hold off and went for it!

A short drive up the road then down a dirt road brought us to the trailhead we were seeking.  We had been advised – and everyone was right – that the best way to enjoy Pictured Rocks if we had the time and stamina was to hike a 10-mile loop that took us a couple of miles out past Chapel Falls then another mile or so on to Chapel Rock right on lake Superior, then along Chapel Beach and about three more miles along the shoreline with the pictured rocks actually below us out to Mosquito Beach, then a couple more miles back inland to the trailhead.

That’s just what we did, although the rain did catch us a few times.  We stopped to take shelter the first two times, then decided we’d just keep going.  By the time we got around the 10-mile loop with many stops for pictures (and how could you not stop and snap photos of all of this gorgeous scenery?!?) the parking lot was overflowing with cars and hikers who waited out the weather.  We paid a small price and got a little wet, but the prize was that we were virtually the only people on the trail and got this beautiful place nearly all to ourselves! 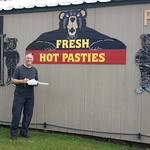 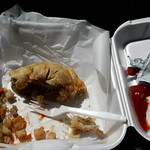 [Trivia for Mom:  Pasties originated from immigrants of Cornwall, England, who came to work the mines of the U.P.  The miners’ wives baked these large, sustaining turnovers for men who often spent up to 14 hours in the mines.]

Hover your cursor over the photo and click on the arrows to scroll through photos of our day at Pictured Rocks:

Holy heck – take a look at this!  This is the storm that blew in across the fields this afternoon!!  It was scary for about 15 seconds, then really cool for about 15 minutes as it came through.

Sunday, June 1 — We did it!  Going Out There has been a dream of ours for nearly five years – ever since we watched the PBS series by Ken Burns, National Parks: America’s Best Idea, back in September 2009. From the couch in my downtown Chicago high rise, the idea was hatched that we should someday go Out There and visit all of the National Parks which would take us to many of the 50 states as well.  [We’ve each been to many NPs but not together.]  Over time, the scope of our trip grew to include all of the National Parks (there are 59) and as many of the National Park Areas as possible (there are 401) while visiting all 50 states.  And so our journey begins today….

We drove our Subaru out to where Charley, our RV, has had all his final parts and bits installed at Ehrhardt’s RV over the last two weeks.  Fred loaded our two mountain bikes on our new bike rack, then successfully (and impressively!) hooked up all the right bars and arms and sockets and put the cotter pins into the right places on our Blue Ox towing system.  With the Subaru now firmly (we hope!!) hooked on to the back of Charley, we climbed into our big coach seats, closed the RV door, and pulled out of the driveway en route to Out There.

We are spending four days (June 1-4) in Starved Rock State Park in Utica, Illinois, getting ourselves and Charley organized for our two-year adventure. We used our new little grill for the first time to cook dinner on our first night at our campsite.  We have found places for a lot of our stuff, but we still need to find good homes for a few more bits and bobs – not easy to do with all that we think we need for two years and just 220 ft² of space!

Monday, June 2 — We got a couple-mile hike in this morning before the rain came and we got soaked walking back to our car.  While initially the trees provided a pretty decent canopy for us, the leaves were no match for the storm that blew through.  Oh well, we were able to get out a little bit and now we’re back in Charley organizing our gear.  Tonight we are going to cook out again and build our first campfire.  Tomorrow is supposed to be beautiful so we look forward to more hiking then.

October 15-17, 2013 — We decided to take one more “shakedown cruise” – Fred’s U.S. Navy term for our early camping trips; I’ve been referring to them as our “training wheels” camping trips.  After this one, we take Charley into the RV shop to drain the water, winterize the pipes, and move him inside for winter storage.

Indiana Dunes State Park and the Indiana Dunes National Lakeshore cohabitate right along the shores of Lake Michigan about an hour east of Chicago – a very easy trip to make from the big city.  The facilities looked to be brand new and were very nice.  This campground didn’t have as many trees as other, more mature campgrounds, but since we were one of the few people there this late in the camping season it didn’t seem to matter much.

The word for the trip was ‘rain’ – as in we were hardly ever without rain.  We did get to test out our oven as I cooked our first evening’s dinner (chicken tetrazzini) in it; it turned out great.  And we tested the heating system – notable that we could heat the place up in all of about two minutes; a good thing to test out and feel confident in.  We also put our bedroom TV and DVR player to the test because of the above-mentioned rain.  This system, too, checked out fine and we thoroughly enjoyed the Albert Brooks movie Lost In America.  David’s (Brooks’) line, “My wife and I just dropped out of society” seemed to have extra poignancy as we watched the movie this time!  “I want to touch Indians” drew good laughs, as well.  And who can forget the nest egg?!??

We did manage to get a 7-ish mile hike in between the raindrops one day – a moderate hike on a couple of different trails – through a quiet bog full of [wet!] fall leaves on the way out with the return trip back on the [chilly and windy!] lakeshore and across the dunes.

Of note, we visited this place during the insane U.S. Government Shut-Down, so unfortunately the National Lakeshore (NLS) part of the shared Visitor Center was closed.  While this was not a huge loss for souvenir-buying sake (in fact, no loss at all), it looked as though it was going to be problematic for me, once again [nightmares of our visit to Hawai’i Volcanoes NP] because I needed my National Passport stamp for my journal!  Fortunately I mentioned something to the volunteer on the state-sponsored side of the center who pulled open his top drawer and told me that he just happened to grab the NLS stamp before that side was shut down.  He said he did it for people just like me who might want the stamp even though the NLS was officially closed.  Great man!  Another close call, but another stamp for my book – yay!

Also of note, we cut the trip short by one day as the forecast called for lots more rain and we were just not in the mood to take cold, wet hikes.  We committed to coming back in nicer weather, although it was quite nice having the area almost entirely to ourselves – I guess rain will do that to a place….