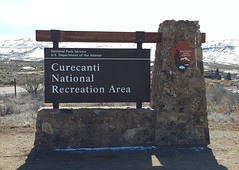 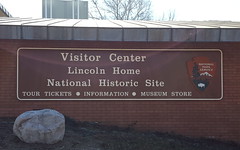 Bent's Old Fort NHS
It’s killing me, but I’m not going to have the time to write specifically about each of these fabulous park units, but they do each deserve attention.  The forts were wonderfully re-constructed and we loved seeing how they were appointed with period-appropriate pieces, props, and supplies.  We had dinner with NPS ranger friends April and Cris when we visited Curecanti NRA — such a treat to see them again in a different park from when we first met each of them last August!  We spoke with and learned from several other incredibly knowledgeable and helpful interpretive NPS rangers at several of the other sites who made their pieces of history come much more to life — too many to name and thank, but we know you and remember you and thank you!  [Dexter A. at Brown v. Board — we look forward to seeing you up in Denali in July!] 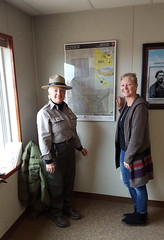 Dexter A. at Brown v. Board NHS

Alas, we are in Chicago now and there’s so much going on here as we prepare to celebrate Fred’s big birthday, see friends and family members, and celebrate the upcoming wedding of daughter Claire and almost-son-in-law Kyle at two bridal showers in the coming couple of weeks.  These incredible park units are now in our rear view mirror but we loved visiting all of them and we would recommend each and every one of them for making our country’s history come alive.

The gladdest moment in human life, me thinks, is a departure into unknown lands.

On December 3, 2015, Laura and I embarked on a trip, albeit to different destinations. Laura was heading to Amsterdam to meet up with our niece who was studying abroad in Grenada, Spain, and who was able to take a long weekend to spend time with her aunt. Having left Charley in San Antonio at our friend’s ranch, driving Toad I dropped Laura at the Dallas-Fort Worth Airport, started traveling west, and began what I would soon refer to as my Toura Obscura.

Toura Obscura because my plan was to hit a number of lesser-visited places as I made my way from Texas up to Chicago to rendezvous with Laura before Christmas. During my 11-day trek I made a total of six stops and took in many interesting sights. My first stop was Roswell, New Mexico, of Area 51 fame (a flying saucer was said to have been moved to this secret military instillation in 1947 after it crashed in the desert), and while I did not see any unearthly beings, a tour of the International UFO Museum and Research Center was fascinating and does make one think about what might be out there. From Roswell it was on to Lincoln to walk in the footsteps of William Bonney, aka, Billy the Kid, and tour the jail and courthouse from which he escaped and in the process gunned down two sheriff deputies. On this trip my route also took me through Missouri and the stomping grounds of Harry Truman in Independence, and Samuel L. Clemens, better known as Mark Twain, in Hannibal. How wonderful it was to revisit these two individuals and the significant contributions that each of them made to our country.

I spent a day in each of the above places, but there were two other spots where I spent the most time: Carlsbad Caverns National Park and Bosque del Apache National Wildlife Refuge. The below posts about my visits to these two places, including photos, are on our website: www.www.jollyoutthere.dev. To find these posts and photos, along with our other New Mexico posts, simply go to our website and select “New Mexico” under the section, “Where We’ve Been,” on the right side of the home page.

Humorist Will Rogers once described Carlsbad Caverns as, “The Grand Canyon with a roof on it.” Laura and I had visited this rather off-the-beaten-path national park in New Mexico in March of last year, but I wanted to go back to take another shot photographing it. The caverns are one of the most extraordinary sights that one will ever see and were easily one of the highlights thus far of this odyssey for me. I ended up spending three days on this return visit deep in the caverns photographing one incredible vignette after another.

Since the elevator into the caverns was not working, I had to walk a 1 1/4-mile trail that winds down into the earth and leads you to what is called the Big Room. As noted by Will Rogers, this room is big, really big. I had read that 10 football fields could fit in it, but after walking around it a number of times, I think that underestimates its immense size. However, it is not just the vastness of the area that makes it spectacular, but also the incredible calcium-carbonate formations that fill the chamber. The many shapes and sizes look otherworldly, and the park service has done a wonderful job of accentuating them with perfectly positioned soft lighting.

Of course, what goes down must come back up, and while I certainly did not have to travel through Dante’s nine levels of hell to reach the surface, it was still a heck of a hike to the entrance of the cave, and one challenging cardio workout. But all in all, well worth the journey.

The Birds of Bosque

It is cold and there is very little sound coming from the darkness in front of me. But I know that they are there because they landed there at sunset the night before. As the first quiet light touches the sky behind me, the gathering of large birds begin to talk and ready themselves for another day in the fields. There are some 4,800 sandhill cranes currently in the refuge on this December morning, and a large number of those are in the pond before me. The number of cranes that migrate to Bosque del Apache National Wildlife Refuge each winter can number as many as 17,000, but numbers are down this year due to the warmer winter up north. The birds simply do not have to fly as far south to find optimal wintering conditions.

As the glow of the sun behind the mountain in the east slowly intensifies, the activity of the cranes begins to ratchet up as a large swarm of snow geese converge on the pond and circle above it, frantically darting up and down and left and right, and slowly descend toward the water and land among the large birds. The clamor generated by the cranes and geese is deafening. An instant before sunrise the snow geese “blast off” as one and fly directly over my head in one giant wave and fly toward the sun and the fields of corn in another part of the refuge. While the number of geese at this time of year is less than the 50,000 that will typically migrate to the refuge later in the winter, it is still quite substantial. As the morning dawns, the cranes also begin to lift off in small groups and circle toward the fields. This will continue for almost an hour until all of the birds are gone, and the pond will then sit empty until that first crane returns at the end of the day.

This was actually my second trip to the wildlife refuge, which is located outside of San Antonio, New Mexico, as we had visited the refuge during the annual Festival of the Cranes back in November, 2015. With both of these visits, I was up at 0415 each morning to get into the refuge well before sunrise to catch the “fly out,” and was also in the park until after sunset to see the “fly in” when the birds return to their night roosting spots. Both the fly out and the fly in are truly extraordinary spectacles to experience.

So this was my Toura Obscura. A 2,000 mile trip undertaken by Toad and me over 11 days in early December to parts unknown between America’s southwest and the “city of the big shoulders.” While I did not see the world’s largest frying pan or largest spool of twine, or tour Graceland or gaze in amazement upon the palace made of corn, I did venture off of the beaten path and see a slice of this incredible country that most do not have the opportunity to experience, and it has only left me wanting more.