Yellowstone National Park is our nation’s oldest, and for many, grandest national park.  Established on March 1, 1872, this land was “… set apart as a public park or pleasuring-ground for the benefit and enjoyment of the people….”  And enjoy we did — for almost a month!  We stayed in three different campgrounds at the north, west, and south entrances to the park so we could really take in this vast, awesome park that now protects over two million acres in the northwest corner of Wyoming, spilling over into Montana and Idaho. While it doesn’t look like it, this area was once a supervolcano that erupted about 2 million years ago, then again about 1.3 million years ago, and then again about 650,000 years ago.  The central part of the park is the now-collapsed caldera, or basin, that measures some 30- by 45-miles; today it’s filled with water and is Yellowstone Lake.  The magmatic heat that caused those huge eruptions in the past is what powers the park’s shimmering geysers, steaming fumaroles, burbling hot springs, and sulfurous mudpots today.  Yellowstone is home to a majority of the world’s geysers because of this geothermal activity; there are some 300 active geysers including Old Faithful, famous for its predictability.

Another big draw in Yellowstone is the wildlife viewing.  From herds of bison and elk that stopped traffic when they crossed (and in some sections of the park they did so frequently, often causing traffic backups); coyotes, wolves and grizzly bears that were harder to spot; pronghorn, mule deer, and marmots that made occasional appearances birds, waterfowl, squirrels and pikas… all were a treat to see in the park.

More than 10,000 years ago, Native Americans roamed through these lands, no doubt attracted to the unique geographic features and plentiful wildlife found here.  Thousands of years later, as Europeans and other peoples began exploring in earnest the unknown territory west of the Mississippi River, these explorers and surveyors came across this beautiful place and thankfully decided to preserve it.  Photographs by William Henry Jackson and sketches by Thomas Moran influenced Congress to create a park for all people to enjoy.  Interestingly enough, however, there was no money set aside to protect the park, nor to administer it.  Early park superintendents had difficulty controlling wildlife poaching and the general lawlessness that had settled over Yellowstone.In 1886, fourteen years after the park was established, fifty U.S. Army soldiers arrived, set up tents, and moved in.  Through their discipline and hard work, they oversaw the construction of Fort Yellowstone (buildings still in use today), arrested poachers, managed wildlife, fought wildfires, expelled squatters and educated visitors.  The Army’s assignment in Yellowstone lasted for more than 30 years, and its good work paved the way for the creation of the National Park Service on August 25, 1916.**  By this time, some 30 parks, monuments, and reserves had been established across the country.  This new agency would preserve and protect them and make them accessible to people from around the world.

Fitting it was, then, that we were introduced to a national park ranger via another ranger we had met a few weeks earlier in Idaho, and we got a VIP tour from her in her section of the park, Tower Roosevelt, on her day off.  [A special shout-out (hello and thanks!) to Cris and April, our now-new friends who are both NPS rangers.  Cris in Hagerman hooked us up with April in Yellowstone.]I’m including a few photographs that represent my most memorable bits of Yellowstone, but since Fransel (my nickname for Fred being famed photographer, Ansel [Adams]) is going to share many of the hundreds, nay I’ll say couple thousand, photographs that he captured during our time here in this amazing place, I’ll not repeat the same scenes.

All in all we had a fabulous time in this park as we do in all of the national parks.  But this one, with so many sections and so many different features, was, indeed, really something special.

** Next year marks the 100th anniversary of the creation of the National Park Service.  Get out there and visit a national park — see Find Your Park for details!

You drive through the beautiful Idaho countryside near Ketchum, Idaho, and then you are upon it: exposed, black lava fields as far as the eye can see. But as you drive farther into the park, you begin to see how life is reestablishing itself in the form of first, small sprigs of grass and tiny individual flowers, and then areas of sage brush that are beautiful when contrasted with the deep, black background. And finally, taller bushes and small trees that have somehow taken root in what was a barren wasteland. The beauty here is not only in what you see in the landscape, but also in being able to witness the extraordinary resiliency of this planet that we all call home. Here are a few photos from our visit to this otherworldly park.

While none of these places was on our list of national park units we had planned to see, our re-route to southern Idaho for several days to escape the wildfires north and west allowed us time in each of the following three places: 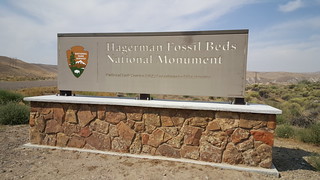 It’s one thing to see movies depicting pre-historic times when animals like mastodons and giant sloths roamed the earth… it’s another thing to actually see the fossil remains of these and other unique creatures and imagine a time on Earth when these animals roamed freely.  Here in the Hagerman Fossil Beds, paleontologists have discovered more than 200 species of plants and animals preserved from a time some three-and-a-half million years ago when the land in this area was much wetter and supported a wide variety of life.

Saber-toothed cats, mastodons, camels, ground sloths, hyena-like dogs, beavers, muskrats, otters, antelope, deer, fish, frogs, snakes, and waterfowl all lived in the area of southern Idaho, as did a now-extinct animal known as the “Hagerman horse.”   Looking less like a horse and more like a zebra, it is believed that a sudden flood caused a herd of these zebra-like creatures to die all together here.  Their bones fossilized and were buried under sediment layers for over three million years.   In 1929, a rancher near the small town of Hagerman showed some fossil beds to a government geologist.  A remarkable discovery this was!  Throughout the 1930s, Smithsonian Institute geologists excavated some 120 horse skulls and 20 complete skeletons from one of more than 600 fossil sites here outside Hagerman.  In total, these fossil beds have produced more than 40,000 specimens.  The Smithsonian has exchanged several Hagerman horse skeletons with other museums, resulting in their display around the world.  The lesson is taught that here in the Hagerman area, as in all other areas when significant environmental change takes place, plants and animals have three options: adapt to their new environment, migrate away from the changing area, or die.      Minidoka National Historic Site — Jerome, Idaho 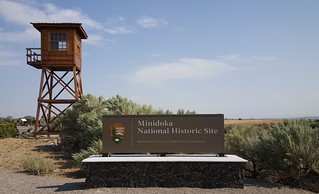 Two months after the Japanese attack on Pearl Harbor brought the U.S. into World War II, President Franklin D. Roosevelt signed an executive order that forced nearly 120,000 Japanese-Americans into ten relocation centers located in isolated areas across the country.  The Minidoka War Relocation Center in south-central Idaho is one of these internment camps.  Fearing Japanese sabotage on the West Coast, some 9,000 Japanese-American citizens and resident Japanese aliens from Alaska, Washington, and Oregon were uprooted and involuntarily moved to this desolate, high-desert, middle-of-nowhere place where, from August 1942 until October 1945, they were forced to live.  Finally after the war had ended they were allowed to return home.

Despite their internment, most Japanese Americans remained intensely loyal to the United States, and many demonstrated their loyalty by volunteering for military service.  Here at Minidoka, nearly 10 percent of the internees volunteered for service; the highest number at any of these camps.  Today a large memorial stands to honor those Japanese-Americans from this place who proudly served. Today’s Minidoka site, known locally as Hunt Camp, preserves a few of the remaining relics of the camp that weren’t even finished when the first internees arrived.  A few interpretive and memorial displays are here for visitors to see, but most of the exhibits related to Minidoka are on display at another location and will be added to this park in the future — it would appear when more budget money is allocated here.   Craters of the Moon National Monument & Preserve — Arco, Idaho 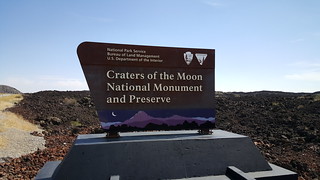 A “weird and scenic landscape peculiar to itself” is how President Calvin Coolidge described the site when Craters of the Moon National Monument was established in 1924.  This strange landscape of lava fields was formed not from a giant erupting volcano, but from lava leaking out from a series of deep fissures known collectively as the Great Rift which is located in the Snake River Basin in south-central Idaho.

For much of this area’s early history, these lava beds were a mysterious blank spot on maps.  Shoshone Indians were known to have passed through here.  In the 1800s, European-Americans came through the area, as well, but they mostly avoided the lavas.  Finally, through sheer curiosity, federal geologists explored here in the early 1900s.  And in the 1920s, a taxidermist and Idaho promotor, Robert Limbert, helped draw national attention to these lava lands which contributed to the establishment of Craters of the Moon as a national monument.  Famously in 1969, NASA’s Apollo Astronauts came here to study basic volcanic geology as they prepared for their moon missions.

The park has been greatly expanded over the years with much of it designated as wilderness.  It features a 7-mile scenic drive through lava fields and sagebrush steppe grasslands that is really quite beautiful.  Visitors can hike up a cinder cone, through lava-tube caves and tunnels, and even backcountry camp in this place that, while seemingly forsaken, is actually teeming with life. 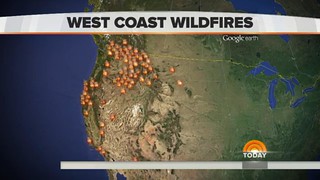 When we mapped out our route from the time we returned from Alaska in mid-August through the end of September, we figured we would be driving through Idaho for just about an hour up at the skinny part of the state as that would connect us from North Cascades NP in Washington to Glacier NP in Montana – both parks being up along the Canadian border.  But as the fires out here in the west continued to rage on, we found ourselves re-routing to try to get away from them and the toxic smoke they were producing. We looked at the map and decided that Ketchum, Idaho, would be a good destination as that looked “south enough” from the fires and hopefully “away enough” from the smoke.   Then after a few days, smoke and fire permitting, we could re-route back north through Missoula, Montana, and up into Glacier National Park where we had reservations from August 30-September 8.  This re-route had us driving south and east nearly 750 miles over two days which is a lot of RV driving (we have found that 250 miles a day is comfortable) and staying in Walmart parking lots for those two nights in order to keep moving. 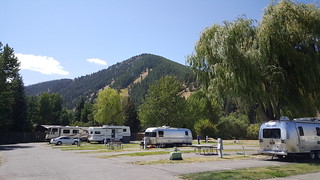 So on August 24th we pulled into a great little campground at the base of the Sawtooth Mountains just outside Ketchum where we found clean air, blue skies, and lots to enjoy in this great little town right next to the resort ski area of Sun Valley.

While in the area, we also visited three more national park units — Hagerman Fossil Beds National Monument, Minidoka National Historical Site, and Craters of the Moon National Monument and Preserve, and these will be the subject of my next post.