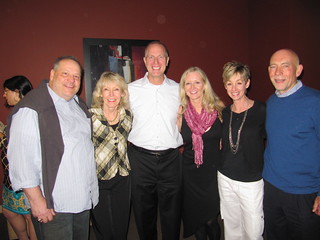 Kathy is retiring today!!  As an avid follower of our travel blog, she’s sure to see this, so Kathy, this post is for you.

CONGRATULATIONS!!!  We are happy to have you in the retiree club.  Every week now has six Saturdays and a Sunday, and it’s the best getting to do what you want, when you want, how you want!

With all of your new horizons, we hope you enjoy every second of your new found freedom.  Relax, have fun, and avoid anything that resembles work for as long as possible!

Lots of love and a big hug from each of us,

Being a lobsterman up here in New England is a way to make a living
For the Atlantic Ocean and rocky coves have a really great way of giving
Lobster to folks like us who want to come here to eat them
For flavor and sweetness – such delectable treat – there is nothing else that beats them!
We enjoyed our lobster prepared all kinds of ways
And for this we give the local lobster chefs praise
Boiled, grilled, chowders and stews, and in mac and cheese
Salads, dips, and lobster rolls – these surely our tastebuds did please!
For sixteen days here in Maine we dined
On delicious lobster – it was so divine!
So we thank all the lobstermen for working hard as you do
We enjoyed being up here, and eating your yummy lobsters too!
My mom enjoyed writing poems — I guess I take after her.  A bit corny, yes, but done in tribute to Mom.
Hover your cursor over the photo, below, then click on the arrows to scroll through some lobster photos:

September 25 – Just pulled into the Walmart parking lot in Plymouth, New Hampshire – place where we’re laying our heads tonight.  We are truly grateful that Walmart allows RVers like us to spend a safe night in their parking lot(s) as we’re passing through.  Tomorrow we’re heading back into Vermont for a week to see more of the fall color – we’ll surely be posting from there.

We’re seeing some really beautiful scenery along southern coastal Maine – have a look: 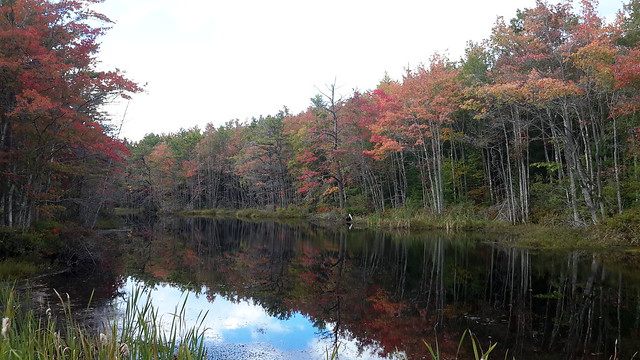 While we didn’t quite time it right to be in Acadia during peak fall color, we are seeing some vibrant fall color now.  We happened on this little spot yesterday while out and about here in southern coastal Maine.  This is just outside of Kennebunkport, and it was stunning.  We expect to see more beautiful color today as we visit more of southern Maine & the New Hampshire coast.

And now for the rest of the park….  When I last left off we were spending two nights (Sept 17-18) in a nice, private campground where we had water & electric hookups so we could get Charley back up to full battery strength.  Following that stay, we moved back down into the park for another three days and nights of “dry camping” (no power/water) in Seawall Campground – once more with no cell/internet coverage either.  We are beginning to realize that these amenities aren’t ‘nice to haves,’ but rather, they are necessities for comfortable camping.  Still, we were glad for our time down in this campground which was farther afield, and, as previously stated, farther off the Verizon grid.

From this campground that was at the southwestern part of the island, we enjoyed the features of this side of Mount Desert Island (pronounced dessert, as in post-dinner treats).  We hiked some more, including taking on three more mountain summits atop which we were rewarded with stunning views.  We took a morning to visit the Schoodic Peninsula, which is another part of this patchwork park – Schoodic is east of MDI.  We visited Pretty Marsh which, as you might imagine, was pretty.  Fred took a ferry out to Little Cranberry Island where he spent the good part of a day in search of his ever-elusive ‘perfect shot’ with his Nikon D800.  We did cross back over to the east side of MDI one chilly afternoon where we partook in an island tradition – tea and popovers at the  Jordon Pond House.  Unfortunately it was too cold and windy to sit outside, but nonetheless we enjoyed our treats inside.  [Thanks, Bill & Kathy C for the fabulous recommendation!]  We visited several stunning coastal towns where we snapped photos then cracked yet more lobsters.  Finally, we drove back around and through some of the magnificent carriage roads that featured Rockefeller’s granite bridges – simply exquisite!

All in all, we thoroughly enjoyed our time here in Acadia National Park; one of the parks we had looked forward to visiting since we started dreaming about seeing all of the national parks back in 2009.  We’ve seen and done so much here, but now it’s time to move on.  Ah, Acadia….

Heck, I haven’t had this short of hair since I was a little girl with my pixie haircut!  Actually my current haircut is even shorter!  I did want low maintenance….  :)

September 18 – Three down, one to go!  With today’s visit to the easternmost point in the United States, we now only have to visit the westernmost point and we will have ticked all four ‘Extreme Points in the Contiguous U.S.’ boxes!

I’ve posted about our prior Extreme Points visits – South: Key West and North: Northwest Angle.  That just leaves Cape Alava, Washington, which we’ll hit around June 2015, and then this quirky little goal of ours will be fulfilled!

West Quoddy Head lighthouse sits in Quoddy Head State Park just outside of Lubec, Maine.  We took a day out of our Acadia N.P. touring to come here, following Route 1 along the Maine coastline about 100 miles up until we saw Canada across the bay, then there it was!

Isn’t it a pretty lighthouse?  I love the stripes, but as we women know, it does make the lighthouse look fat!  ;)

It’s a little hard to keep up with blog posts when you don’t have internet connection!  Much to my surprise – but should I really have been surprised? – the first of our three campgrounds in and/or near Acadia National Park was off Verizon’s coverage grid.  We knew our site didn’t have water or electric hookups as we’ve found that often state parks and national parks don’t offer water/power in their campgrounds, but I guess I was hopeful on the cell/internet connectivity.  Oh well, we’ve moved campgrounds now for a couple of days so we can re-charge Charley’s batteries (his lights and water pump were on fumes as we were sans power for four days/nights – our longest stretch so far), dump gray water and fill up with fresh water, and hurray!, we have cell / internet connection here, so I’m baaaaack!!!  :)

We’re having a wonderful time here at the Maine coastline and in Acadia N.P.  While Acadia is one of the smaller of the national parks, it is one of the most visited – nearly 2.5 million people trek here each year.  As the smart CLO [Chief Logistics Officer – that’s me!] planned it, we’re here after peak tourist season.  I was also trying to time it so we’d see peak fall color, and while I may have been a bit premature for peak color, we’re seeing color change nonetheless, and we are thoroughly enjoying all that we’re doing and seeing here.  Our list of activities thus far includes:

A bit more on Acadia — established in 1916, it was the first national park east of the Mississippi river.  The park is primarily on Mount Desert Island, with other bits scattered on some smaller surrounding islands and the Schoodic Peninsula.  Whereas most national parks are vast stretches of land that have been set aside by the U.S. government, Acadia was donated in pieces, which explains the patchwork nature of the park.

In the mid-1800s, wealthy folks with surnames such as Vanderbilt, Astor, Carnegie, Morgan, and Ford built “cottages” here on the island, but continued development of the land soon threatened the very serenity and tranquility they were seeking.  Fortunately, some of these summer residents sought protection for this special place and lobbied for national park status. Through gifts of these wealthy philanthropists, most significantly John D. Rockefeller, Jr. who gave some 11,000 acres including most of his carriage roads, this land was declared a national monument and named Layfette National Park.  [It was renamed Acadia N.P. in 1929.]

There is a lot more to do here, and we will be doing more in the next few days, so stay tuned for Part 2 of our visit to Acadia.  Meanwhile, have a look at some of my photos.

Hover your cursor over the photo and click on the arrows to scroll through some of our first Acadia photos: